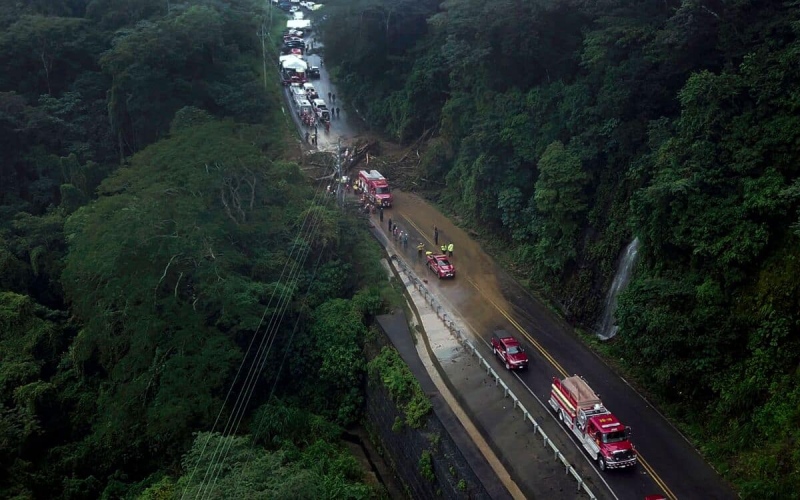 Nine people have died, and four others are missing after a bus, motorbike and car tipped into a ravine in a landslide caused by heavy rain, it said on Sunday Costa Rican Red Cross spokesman Andres Alvarez.

The bus and the two other vehicles fell into a 75-meter-deep ravine on Saturday at the El Hundimiento pass in Cambronero, about 80 km west of the capital, San José.

Three women aged 51 to 61 died, along with six men aged 21 to 66, including the motorcyclist, according to the judicial police who identified the victims.

About fifty people, including the bus driver, were rescued and are alive, according to the Costa Rican Social Security services. The rescue operations ended early Sunday afternoon.

The bus made the connection between the capital San José and the province of Guanacaste and transported around 47 people, the owner of the bus company, German Alfaro, told the Costa Rican daily La Nacion. The Red Cross had previously estimated the number of passengers at around 60.

Images released by the rescue services show the wreckage of the coach at the bottom of a ravine in this mountainous region where rescue operations were particularly difficult.

Costa Rican President Rodrigo Chavez decreed three days of national mourning and announced the cancellation of his trip to New York to attend the United Nations General Assembly due to the emergency situation in the country caused by heavy rains.

“We have been abandoned for years,” local resident Gilber Martinez told local television channel Canal 7, denouncing with other residents the absence of protective barriers or signs on this stretch of road.

The Minister of Public Works Luis Amador, however, considered that “this type of accident is unpredictable”. “It is not the fault of the government or the coach company. This is something we cannot predict,” he said.

In March 2021, a report by specialists from the University of Costa Rica warned of the risk of collapse of the road in this sector.