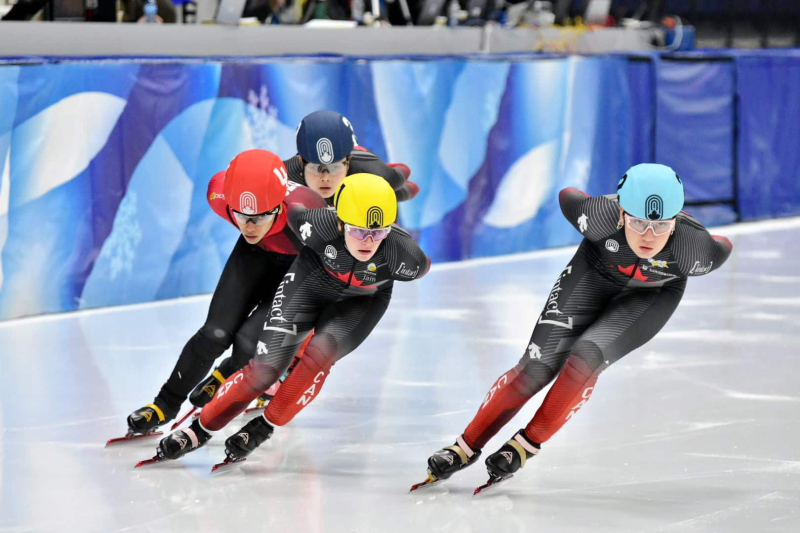 Unsurprisingly Kim Boutin and Courtney Sarault dominated the short track skating selections that ended on Sunday at Place Bell, but above all they showed that they have made giant strides since the World Cup. world in Montreal at the end of October and that they are ready to attack the last stage of the season.

Since the events of the Olympics where the women's relay screwed up the last rally to be ousted from the podium, Sarault has lived through difficult times.

After a training break after the Games where the be human came before the athlete, the Moncton skater was not at the top of her game at the World Cup in Montreal, but she overcame this difficult period.

“When you go through tough times, you get stronger when you get through it,” Sarault said. The turning point of my season came in Salt Lake City when I had a good race and realized I could compete with the best. I won a medal in Kazakhstan at the next World Cup. Since this podium, I believe in myself and I have changed my state of mind. I am myself and I am constantly improving. ”

“I'm back to the level of the Courtney of 2021 who won runner-up, champion, but I'm a better version,” Sarault continued. In my case, the mental aspect accounts for 50 percent of my success. When I'm in a good frame of mind, I run well. I'm very proud of my performance this weekend. ”

The comeback is also good for Boutin.

“We both push each other a lot and it's very healthy,” said the three-time Pyeongchang 2018 Games medalist with her best smile. Courtney is one of the best in the world in the 1500 m and 1000 m. In my case, the long-term motivation is not obvious and this internal competition is very good. I realized this year that I have to continually repeat my efforts to stay at the best level and that's the aspect I'm most happy about. I can't just perform at the right time. »

Boutin did not have the desired start to the season.

“ My performances in Kazakhstan reassured me because it is difficult to make B finals when you have been successful. The objective this weekend was to do well in the 1500 m to have the chance to run this event in the World Cup. I was sixth before the trials and that's why I couldn't do 1500m in the first four World Cups. I don't want to forget distance. »

The second selections will not have changed the portrait of the women's World Cup team. Behind the two leaders Sarault and Boutin are Renée Steenge, Rikki Doak, Claudia Gagnon and Danaé Blais.

In men, the portrait will be slightly different. Author of three victories, William Dandjinou had some thunderous selections to finish first and qualify for the World Cup, which he had not been able to do in the fall. Followed by Maxime Laoun, Pascal Dion and Félix Roussel. Sick, Steeve Dubois will get a pass given his performance in the first half of the season and in the first selections.

The last position will go to Jordan Pierre-Gilles if his state of health allows it (< em>see other text) or Mathieu Pelletier who is prequalified for the world junior championship.

Her absence during the selections this weekend in Laval suggested that she wanted to at least take a break, but the main interested party confirmed that her decision was final.

“I quit completely,” said 24-year-old Charles. Skating is over and I'm retiring. The year after the Olympics, the motivation is less. The flame was less when I went to the arena and the motivation had diminished. In the fall, I knew I needed a break. It remained to be determined whether this was the end or just a break. ”

Charles left the door open for a possible return, but the first weeks of autumn confirmed his decision.

“I left the door open thinking that maybe the motivation would come back when I saw my teammates compete,” she said. I continued to train on my own, but without having a comeback plan in mind. If I had wanted to come back, I would have had to come back to Laval during the selections. »

Charles quickly realized that the time had come to turn the page on his athletic career.

“When the World Cup started in October, I was not tempted to compete at all,” she explained. It confirmed that my time was up and the time had come to move on. My decision to quit was quite simple.

Did her participation in the Beijing Olympics influence her in her decision?

“Participating in the Olympics was a big goal since I was very young and I achieved it, she agreed, but, in my heart, I had other goals too. I also wanted to win an Olympic medal, but I didn't want to go on for four years to succeed. I didn't want to stay for the wrong reasons.

In Beijing, the Canadian relay that Charles was part of finished in fourth place after a difficult last stint that left them out of the podium.

Enrolled in the finance major at McGill University since September, Charles is a full-time student.

“I have always combined the two and it was no problem to continue to do it. It takes discipline and prolongs your graduation, but I'm not in a race to finish as quickly as possible. I just wanted to move on to something else. »

Jordan Pierre-Gilles initially injured his right ankle on October 14, then again on Friday, so he had to withdraw from the selections.

Jordan Pierre-Gilles wants to take the necessary time to heal his right ankle even if it could mean missing the next stage or two of the World Cup.

Involved in a collision while he was in first place in his qualifying heat during the first 1000 m on Friday, Pierre-Gilles saw his blade sting in the ice before he entered the mats.

Even if the final diagnosis will not be known until the next few days when he will meet the Canadian team doctor on his return to the National Center at the Maurice Richard Arena, the Sherbrooke skater is aware that a period rest will be needed to fully heal his ankle.

“Since my first injury in Quebec in October during the first trials, my ankle is more fragile,” he said. It will be important to give me time to come back to one hundred percent. It's the first year of the Olympic cycle and I have to make sure it doesn't become a chronic injury. Rehabilitation will be important. ”

Looking back, Pierre-Gilles realizes that he was not as well recovered as he said he was when he returned to the World Cup in Montreal at the end of October.

“  I was telling you I was 85 or 90 per cent recovered, but it was over 80, he said. It was less painful, but the pain was recurrent. I saw that my right ankle was not like the left. This is not worrying because I have the time and I am well surrounded by the medical team. »

As the rules provide, Pierre-Gilles will make a request for an exemption.

“The team leaves in two weeks for the next World Cup and it is clear that I want to go, but the question is whether I will be able to go, he summed up. The priority is my rehabilitation and participating in the world championship in mid-March in Seoul. When I get back, I want to be able to fight for medals.

While scoring his first career individual World Cup podium in Kazakhstan in December, Pierre-Gilles is satisfied with his first half
of the season.

“With my bronze medal in the 1000m and our three gold medals in the relay, I am happy, but I want to continue to make progress in both individual and team races. My objective for the end of the season is to consolidate my place in the Top 5 and on the podium. »

Friday&nbsp ;13 was not easy for Pierre-Gilles. First in a heat of qualifying, he couldn't avoid a boulder collector who had ventured onto the track at the wrong time.

The skater following him hit him and the blade of the latter struck the face of the third who was just behind him. The unfortunate man had to be rushed to hospital. The competition was stopped for 50 minutes.

After surgery, Justin Bessette was back at Place Bell on Saturday to follow the second day of the selections.

“It was a typical Friday the 13th,” concluded Pierre-Gilles.