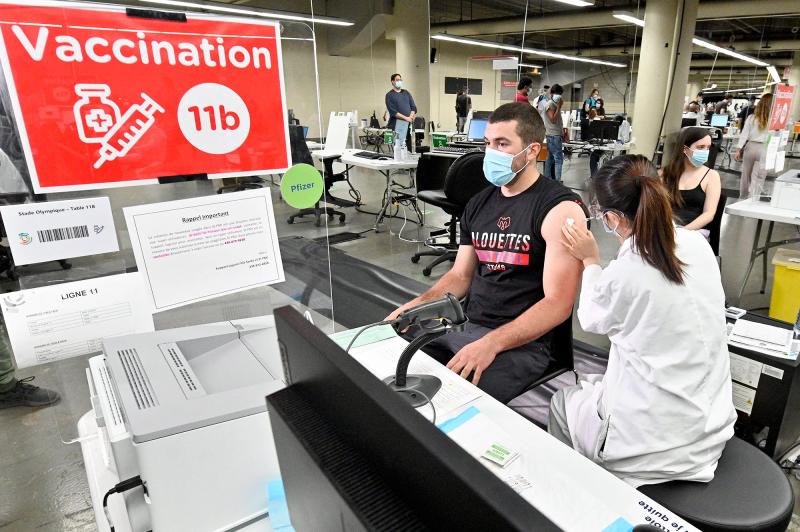 Vaccinators hired for the COVID-19 vaccination campaign can earn more than $500 a day.

Our Bureau of Investigation has learned that people recruited by the JeContribue platform can receive a salary equivalent to what they received before retirement.

Until last May, they were also entitled to an attendance bonus of up to $1,800 per month. They received this bonus varying from $15 to $90 per day after only one day or two half-days of work per week.

Other amounts, such as evening bonuses, can also be apply.

“In fact, it is possible that some vaccinators make up to $500 per shift, including bonuses,” said Catherine Domingue, director of media relations at the Integrated Center for health and social services (CISSS) of Montérégie-Est.

A retired civil servant recruited on the government platform was stunned when he was told how much he would receive in salary.

“I was told that the salary could vary by less than 50,000 $ to over $100,000 for the exact same liability. How to justify this variability and above all how to justify a remuneration of $100,000 to inject a vaccine? asks the one who agreed to speak only on condition of anonymity.

As part of the vaccination campaign, Quebec has expanded the types of workers authorized to give doses. In particular, veterinarians, dentists or chemists have been authorized. After two short training sessions, they are able to perform injections.

For employees from the health network, the remuneration is applied according to the salary scale of the original job. Thus, a nurse clinician or a biochemist can make between $27.08 and $47.98 before applicable bonuses and fringe benefits (holidays, holidays or illnesses).

So far, healthcare institutions have paid out tens of millions of dollars in compensation. Thus, the bill exceeds $30 million only in Quebec.

More than 21 million doses have been administered in Quebec since the start of the vaccination campaign in December 2020.

The vaccination campaign in a few figures&nbsp ;

The government has created two classes of workers by choosing to recruit personnel for vaccination directly from the population.

“People who have negotiated conditions on the side, it is unacceptable”, deplores the president of the Provincial Council of Social Affairs of CUPE, Maxime Ste-Marie.

The latter, which represents more than 30,000 employees of the health network, denounces the management by ministerial decree decreed by the government.

The conditions of workers in screening and vaccination centers have been established by ministerial decision in the context of the health emergency.

Maxime Ste-Marie recognizes the essential contribution of these workers and encourages vaccination, but he wonders why the health emergency remains in force in the network, two and a half years after the start of the pandemic.

“We need everyone, but many are in an unknown status. Their situation must be regularized, especially if they are competent people to stay in their jobs,” he said.

According to him, the government must do more to fill the thousands of positions still vacant in the network.

At the CIUSSS du Centre-Sud-de-l’Île-de-Montréal, it is reported that it has paid more than $22.7 million in compensation since the start of the vaccination campaign. In total, more than 750,000 doses were administered by the establishment, in particular on the site of the Palais des Congrès in Montreal.

While he recognizes that some workers can earn more than $500 a day, he indicates that the average salary is more around $40 $ per hour.

At the Ministry of Health, it is indicated that it is the CISSSs who manage the remuneration.

“The salary of these people is determined by their level of diploma and the years of professional experience acquired in their original job title,” says Marie-Hélène Émond by email.