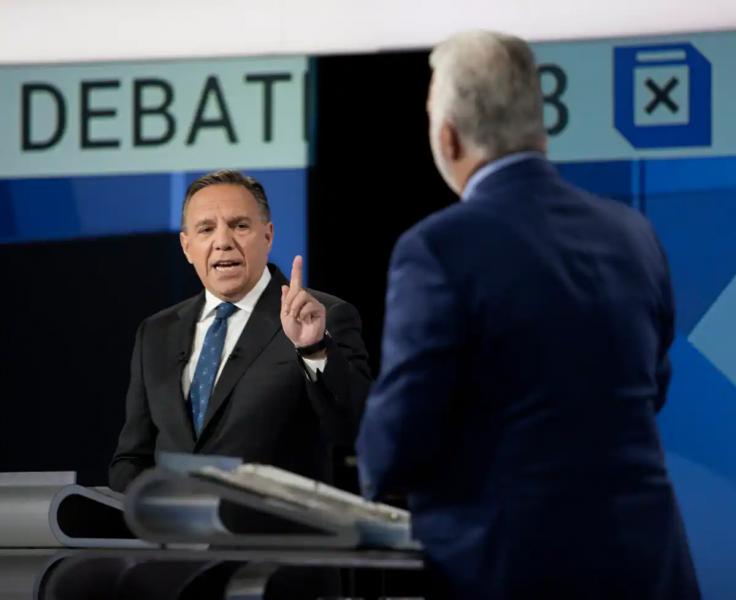 If infected with COVID-19 and too ill to participate in televised campaign debates virtually, party leaders would replace themselves with a designated person. Solidarity Manon Massé and conservative Karim Elayoubi have already been chosen as substitute debaters.

The five parties have agreed on a health protocol when they cross swords on the airwaves of TVA and Radio-Canada. Chefs who have contracted the virus will be able to participate in the exercise remotely. If they are too ill, a replacement will be appointed.

The Coalition Avenir Québec (CAQ), the Parti Québécois (PQ) and the Liberals (PLQ) want to keep their game plan secret if the leader of their political party catches COVID-19 and is unable to participate in the clashes.

At solidarity, the decision has already been made and it will not surprise anyone. It is Manon Massé, co-spokesperson for Québec solidaire, who will take the heat if Gabriel Nadeau-Dubois finds himself unable to participate in the debates.

If Éric Duhaime was too affected by the virus, it is his candidate in Argenteuil who would defend the colors of the Conservative Party. Dr. Karim Elayoubi is the Chief's Health Advisor. It should be noted that, while he defends free choice, a value dear to the conservatives, the emergency physician recently admitted having encouraged the population to be vaccinated during the pandemic.

Who would be Legault's replacement?

Who would take the place of François Legault to hold the strong caquiste? The Deputy Prime Minister, Geneviève Guilbault, the Minister of Health, Christian Dubé, or even the star candidate of Lévis, former host and ex-PQ, Bernard Drainville? The bets are on.

“We have plenty of depth. So we have plenty of candidates who could be able to replace the Prime Minister at a moment's notice. Candidates or candidates”, is limited to commenting on the director of communications of the chief caquist.

Among the PQ, “no one is officially designated for the moment, we are having discussions on it at the moment”, they say. Of course, the PQ strategists have their own idea, but want to “keep it in-house” for the time being. “We have plenty of good candidates who could do it,” we insist.

What we know about Paul St-Pierre Plamondon's preparation for the debates is that outgoing MP Pascal Bérubé participate.

Nothing has yet been decided in Dominique Anglade's team, according to its director of communications. “We'll see if that happens, but for now, it's the chef and no one else. It's a great team work, we'll see if it happens, ”we plead. Clearly, the PLQ will designate the replacement if ever the leader catches COVID-19, not before.

It should be noted that outgoing Liberal MP André Fortin is participating in the preparation of the leader with a view to exercise. Mr. Fortin has already advised Justin Trudeau in the past in view of the televised confrontations between the aspirants to the post of Prime Minister of Canada.