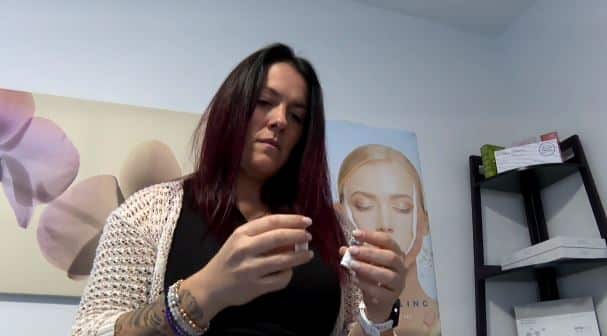 Six weeks after starting treatment in the United States to improve her state of health, a resident of Magog, in the Eastern Townships, with long-term COVID, is getting better and notices a reduction in her symptoms .

TVA Nouvelles had met Valérie Côté in mid-October. Extreme fatigue, rapid heartbeat: the one who now offers beauty treatments at home had to give up her full-time job, as well as CrossFit and mountain biking earlier this year due to her many symptoms. After consulting the specialized clinic in Estrie, she had turned, for lack of treatment in the province, to specialists in the United States.

“I have a lot of energy. The insomnia I had for 10 months left me. Recovering from my nights does me so much good that my symptoms have practically all disappeared,” said Valérie Côté.

Six weeks after starting her medication, Ms. Côté is now resuming certain activities that she had neglected since the beginning of the year. She is even considering going back to working full time and resuming physical activity. His goal now is to get back on his mountain bike by next spring.

“Before, the weekend was complete rest. I barely went out to get groceries, or I asked my spouse to do it. Now I do everything with him. I even received friends on Saturday. I can enjoy life more than before. I feel like I could even run, she laughed. I would like that, but I would like to have the OK and be certain”

Last May, the Government of Quebec announced the deployment of five reference centers and a dozen satellite clinics to help people suffering from the long COVID. TVA Nouvelles tried to get an interview with Dr. Alain Piché, who runs the Sherbrooke clinic, but he was unavailable.