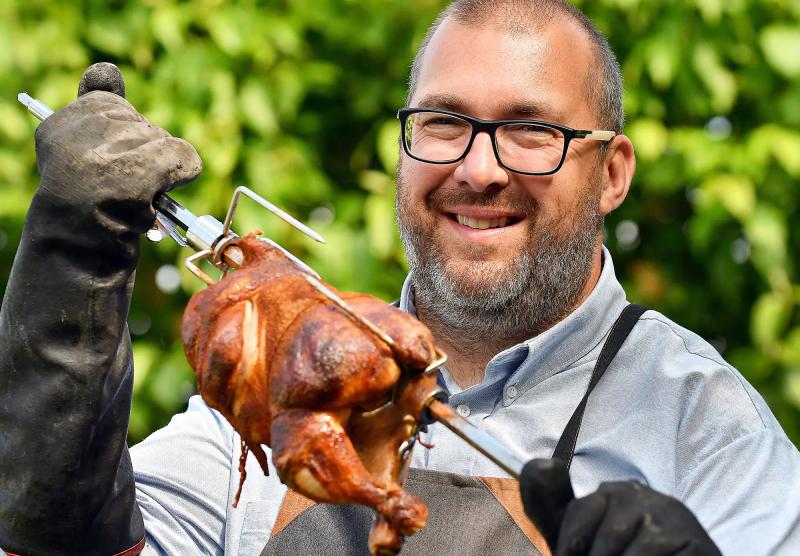 From director of a notary office to cashier in a barbecue shop, an enthusiast who had to start from scratch after losing his job chose the path of passion to get back on his feet. A few years later, he is about to make a living from the art of grilling under the name of Monsieur BBQ.

The story of Clément Chiasson shows that you can always get up when life gets in the way.

When his wife's notary office, which he managed as general manager, fell victim to a sad story of fraud that led to bankruptcy, the man had no choice but to start from scratch. .

“I had a passion for barbecue, so I thought I was going to have fun in it at least”, he says about this job as a cashier at BBQ Quebec.

“Going from director of a notary's office to cashier, it was tough, it's hard on the ego, but at least I had fun. »

One thing leading to another, he became an assistant trainer and that is where the flame of teaching was lit.

“I saw people who didn't know how to make a steak and I had the bug of teaching,” explains Mr. Chiasson, who then decided to go into business by creating monsieurbbq.com .

After spending the year 2020 preparing for his training offered completely online, he launched into January 2021.

Since then, he has been on TikTok, Facebook and Instagram and he even launched the podcast Dans'Boucane, which has more than 100 episodes.

Since that day, Clément Chiasson simply no longer feels like he is working. He did find a full-time job as a management consultant, but he intends to be able to devote himself full-time to the barbecue soon.

“Eventually, I would like to give up my boring job by day and make a living from the barbecue”, confides the enthusiast. “It would be hard not to like it because I realize barbecue is all about making people happy. It is unifying. »

Daily, he devotes one to two hours to the barbecue. From 6 a.m., before work, he films the capsules that he must share with his subscribers to ensure his strong online presence. His most viewed video on TikTok reached 500,000 views, proof of the enthusiasm for his content.

“It was not much, it was 10 seconds where I put a big steak directly on the coals, but it hooked people asking me how to do it. That’s why I started my course at the bottom,” says Mr. Chiasson.

“My passion is to train. I don't want people to stress, I don't want them to miss their products. And I want to show them that these beautiful dinners are not just reserved for Saturdays, that you can eat well all the time, ”adds the one who got hooked accompanying a friend who had a BBQ caterer there. a few years.