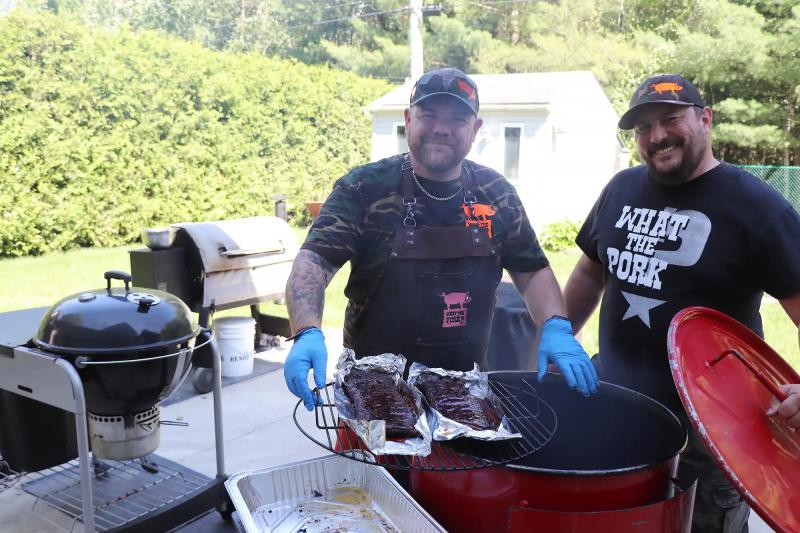 The passion for barbecue drove two friends to travel thousands of miles to compete in the United States and start their sauces and spices business, What the pork.

Alexandre Bourgeois and Jocelyn Martel share a mad love of barbecue that has brought them back to American competition this summer in the Kansas City Barbecue Society (KCBS) pro circuit, after a break forced by the pandemic.

The duo that bears the name What the pork will head with their trailer to Maine, Vermont and possibly Lake Placid, where they intend to shine with 100% Quebec products.

Drummondville residents will try to beat their performances from 2019 where their ribs were ranked second in the world, based on cumulative score in the category 10 competitions and less.

These two dads often live these adventures with their spouses and children. “Our passion has become a business and a family affair”, shares Mr. Bourgeois.

The two chefs have developed their expertise after countless trials and errors, before the era of capsules available on YouTube.

If cooking chicken is Mr. Martel's hobby, beef brisket is a specialty of its partner.

To distinguish themselves, these pioneers make their own What the pork spices and sauces. “That's what keeps us busy every weekend,” they say.

The two friends created their What the pork sauces and spices business. Sales have exploded during the pandemic.

Their products are available in 200 points of sale in Quebec. During the pandemic, sales of their jars of sauces and spices exploded, as did barbecue equipment.

“We are keeping pace. It's fun to see that! It's grown so big,” say those who work at Superior Propane in “real life.”

The profits from the products are used to finance their competitions which are expensive, but profitable.

When they arrive on Friday evening, the two friends like to share a beer with competitors and their “steal” some stuff. “That’s where it pays off the most,” comments Mr. Bourgeois.

These colleagues have befriended personalities, such as Bill Gillespie, who are their inspiration. “It’s a really fantastic community! exclaims Mr. Martel.

Back in Quebec, the duo will organize the Labonté BBQ Classic, which will bring together 36 teams of “cooks” on August 6 at the Sainte-Perpétue Pig Festival.

“We want to introduce the competition”, they conclude.