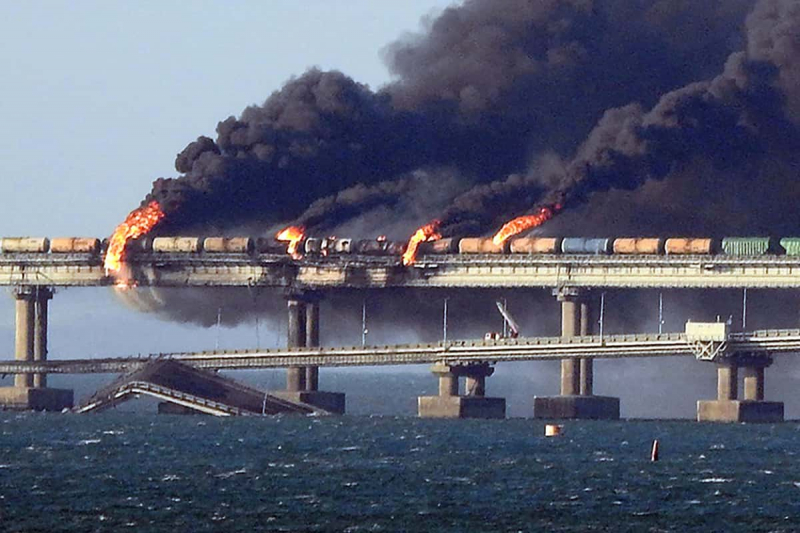 The Russian security services (FSB) said on Wednesday that they had arrested eight people suspected of taking part in the bombing attack that hit the Crimean bridge, while claiming to have foiled two plans to attacks also attributed to Kyiv.

In a press release, the FSB affirms that five Russians and “three Ukrainian and Armenian citizens” were arrested as part of the investigation into the “attack” having targeted the bridge last Saturday, without further details on these last three suspects.

“The explosive device was concealed in 22 pallets of plastic film rolls with a total weight of 22 770 kilos,” the FSB said.

According to this source, the explosives were sent in early August by boat from the port of Odessa, Ukraine, to that of Ruse in Bulgaria. They then passed through the port of Poti, Georgia, then were shipped to Armenia before arriving by road in Russia, again according to the FSB.

Russian services claim that the explosive device entered Russia on October 4 in a truck registered in Georgia, before reaching the Russian region of Krasnodar, bordering Crimea, on October 6.

The FSB claims that this “terrorist attack” was organized by Ukrainian military intelligence, ensuring that an agent from Kyiv had coordinated the transit of the explosives and had been in contact with the various intermediaries.

On Saturday, a strong explosion severely damaged the Crimean Bridge, which connects this Ukrainian peninsula annexed by Moscow to the rest of Russian territory. However, traffic then partially resumed on this vital communication route for Moscow.

The Russian authorities claim that a truck bomb is at the origin of the explosion. In response, Russia carried out massive bombardments across Ukraine on Monday and Tuesday.

In two other statements, the FSB also said on Wednesday that it had thwarted two attempted attacks in Russia attributed to the security services. Ukrainian Security Service (SBU).

The FSB claims to have arrested a Ukrainian citizen accused of having brought into Russia, from Kyiv and via Estonia, two Igla portable missile launchers, a Soviet-designed weapon . These devices were to be used in “acts of sabotage and terrorism” in the Moscow region, according to the FSB.

Russian security services also said they arrested another Ukrainian who arrived in Russia from Kyiv , via the Estonian border. According to the FSB, he wanted to carry out a bomb attack on a logistics center in Bryansk, a Russian city not far from the Ukrainian border.