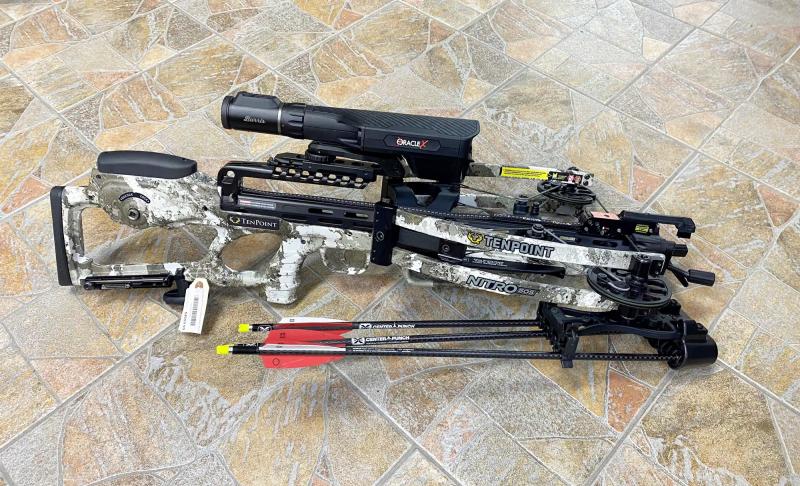 Until 2007, there was little benefit to using a crossbow, as it could only be used during rifle hunting season.< /p>

Since that time, duly certified nemrods have been allowed to pursue game with this type of weapon, which is nothing more or less than a bow mounted on a shaft whose string is retained by a mechanism and activated by a trigger.

Sales have since literally exploded and the various models are sold in the tens of thousands.

Benoît Ferland, Ecotone A. Ferland Sport stores of Roxton Falls and Drummondville, is a hunting enthusiast, just like his father Alain, the founder of these shops.

This family has been specializing, for more than 40 years, in the sale of weapons that shoot arrows at high speed.

I asked Benoît, a skilled hunter who has collected several large trophy mammals over the years, to kindly suggest five models of high-performance crossbows, for all budgets and all types of hunting. As he explained to me, the choice is different from one amateur to another, depending on his budget. Here is the essence of his remarks on the subject and his recommendations.

► For more information, call 450 548-5777 or visit the page facebook.com/Ecotoneferlandsports

Here is the ultimate according to Benoît Ferland. This $4,700 crossbow, recognized as being one of the fastest, lets you shoot arrows and send them flying at a blistering speed of 505 ft/sec. He describes this very compact version with inverted branches as a real war machine. The user can easily perform shots up to 100 meters. The 2.5-7x Burris Oracle X Rangefinding Crossbow Scope features an integrated laser rangefinder that generates a single, precise illuminated aiming point automatically adjusted for distance and angle. The new Decock crank is integrated for arming or disarming in complete discretion. The inverted firing ramp and the carriage that slides on the rail are perfectly balanced to ensure the desired accuracy. It only requires 5 lbs of power to operate. All accessories that can be added are included in the package.

This very affordable model, selling for less than $350, weighs only 6.1 lbs and is easy to stretch. It shoots 20” arrows at a velocity of 370 ft/sec with 135 foot-pounds of kinetic energy. The bow weight is 195 lbs. The rope length is 33 1/4 in. and the cable length is 18 5/16 in. Among its attractions, let's talk about the polymer rail, the adjustable handguard, the dummy anti-shooting trigger, etc. This version recognized for generating precise and constant shots, despite its very low selling price, is equipped as standard with three crossbow bolts, three 100 gr course tips, a 4 x 32 mm riflescope, a quiver side mount quick release, cocking rope and rail lube.

According to the specialist interviewed, it is the hunting weapon offering the best quality/price ratio on the market. It retails for less than $590 and the anti-vibration polymer rail on the blades is guaranteed for life. It has an integrated crank to facilitate cocking the crossbow with very little effort. The stock can be adjusted in five ways, as can the foregrip, to ensure an optimal shooting position. The Fuel fires arrows at a blistering 415 fps. The trigger can be activated with a minimum pull of 3.5 lbs. When cocked it measures 14.75″ wide and 18.75″ when uncocked. Weighing 6.7 lbs, it develops a pressure of 210 lbs and a kinetic energy of 141 ft/lb. Set includes illuminated 4x magnification scope, rope brakes to reduce noise, cocker rope, quiver with three Hypr Lite arrows and practice tips, and rail lubricant.

This weapon offering a pressure of 180 lbs and a velocity of 370 ft/sec is equipped with a polymer rail and inverted pulleys. Once stretched, it becomes very compact, going from a width of 14.25 to 9 inches when cocked. According to Mr. Ferland, it is a robust and reliable model that rarely fails. The Titan M1 is offered in three versions, either with cocking device with Sled-cord stretching ropes, with the Accu 50 incorporated in the stock or with the Accudraw which is a crank in the stock, ideal for hunters with little physical strength. These guns all have the Decok system to take the strain off the cable. Optics-wise, there's a 3x Pro-View 3 scope on a 7/8″ machined aluminum frame. A quiver with arrows completes the set. Weighing 6.4 lbs and 32.5″ long, they are priced between $1,049 and $1,400.

This new model stands out with its high speed of 420 ft/sec allowing shots up to a distance of 100 yards. When crinked, as we often say in popular language, it becomes ultra compact with a width of only 6 in. Its 33″ overall length and 6.8 lbs weight make it easy to maneuver. The crank system incorporated in the stock makes it easy to arm or disarm the crossbow without any noise. The belt-equipped carriage system works very smoothly, especially since the arrow does not touch the launch pad thanks to the ingenious roller mechanism to hold the arrow in place, directly in the nock. This results in surprising precision. Three practice arrows and tips are included in the package along with a quiver with mounting bracket and an illuminated telescope with 100 yard illumination range. Model sold at $2400, a five-year warranty accompanies everything.