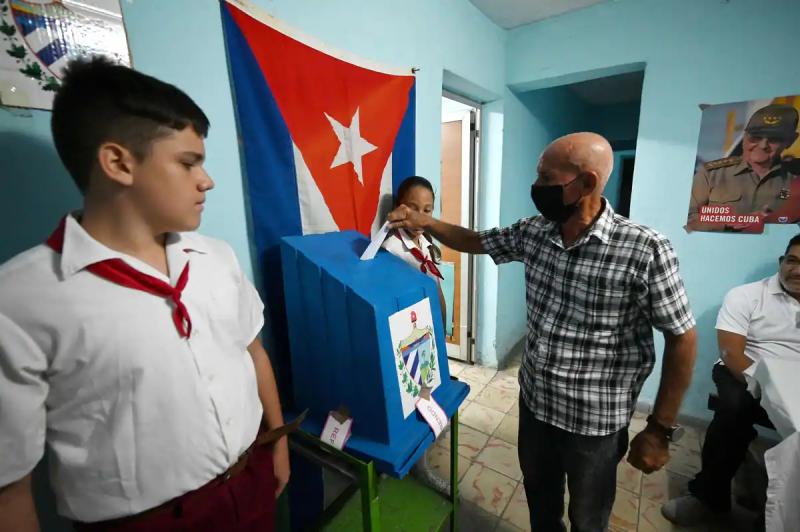 Cubans voted Sunday in a referendum on a new Family Code, which notably includes same-sex marriage and surrogacy, a text widely supported by the government.

Most polling stations across the country closed at 6 p.m. Some closed an hour later, in Havana and some provinces, due to bad weather.

According to the National Electoral Council (CEN), turnout at 4 p.m. was 54.82%. Turnout at the close of the poll was not immediately known.

According to the electoral authority, the results should be announced on Monday. The text will come into force immediately if it obtains more than 50% of the votes.

Some 8.4 million Cubans were called to answer yes or no to the question: “Do you agree with the Family Code?”.

“It's a pretty quiet Sunday. If we compare it to other polls, it's different, we don't see any enthusiasm, “said Eduardo, a 57-year-old voter who did not wish to give his name, in the afternoon.

The new Code of the family defines marriage as the union of “two people”, legalizing same-sex marriage, and allowing same-sex adoption.

It strengthens the rights of children, the elderly and the disabled, and introduces the possibility of legally recognizing several fathers and mothers, in addition to biological parents, as well as non-profit surrogacy.

Several these subjects remain sensitive in Cuba, in a society still steeped in machismo and whose communist government ostracized homosexuals in the 1960s and 1970s.

Nevertheless, over the past twenty years, the attitude of the authorities towards homosexuals has changed markedly, and the “yes” vote has been the subject of an intense government campaign, on television and on social networks.

The Family Code “is a fair, necessary, updated and modern law that gives rights and guarantees to everyone”, insisted President Miguel Diaz-Canel after voting in a neighborhood in the west of Havana.

“Perhaps a few years ago I would not have accepted this code, but you have to understand that societies evolve (…) It is a very human code, totally inclusive”, recognized Elio Gomez , a 78-year-old ex-professor of Marxism.

This is the first time that Cubans have been called upon to vote yes or no on a law, the referendum being reserved until then constitutional texts.

The election comes as the country of 11.2 million people is going through a deep economic crisis and is facing a record wave of emigration. More than a year ago, in July 2021, historic protests to cries of “We are hungry” and “Freedom” rocked the island.

The Head of State himself even recognized “that for such complex issues, where there is a diversity of personal criteria”, and in a difficult economic context, “people can have a sanction vote”.

“There is no there is no food, hygiene products. We survive in the midst of power cuts. I see no reason to say + yes +”, explained to AFP José Antonio Callejas, 47, at the exit of a polling station in the capital.

In addition to the rejection of the Catholic bishops, the broad nature of the text may have fueled the negative vote or the abstention, certain voters saying, for example, that they were in favor of marriage for all, but opposed to the adoption.

For political scientist Rafael Hernandez, it is the “most important human rights legislation” in Cuba since the 1959 revolution, to the point that some felt that the government was “going too far”.

The progressive nature of the text also divided opponents.

“We are not voting yes with the PCC, it is he who is voting yes with us”, gay activist Maykel Gonzalez Vivero had insisted on Twitter a few weeks before the election, in reference to the Cuban Communist Party, a single party .

On Sunday, he posted a photo of his ballot in favor of the text.

Other activists and dissidents had called for voting against or abstain.