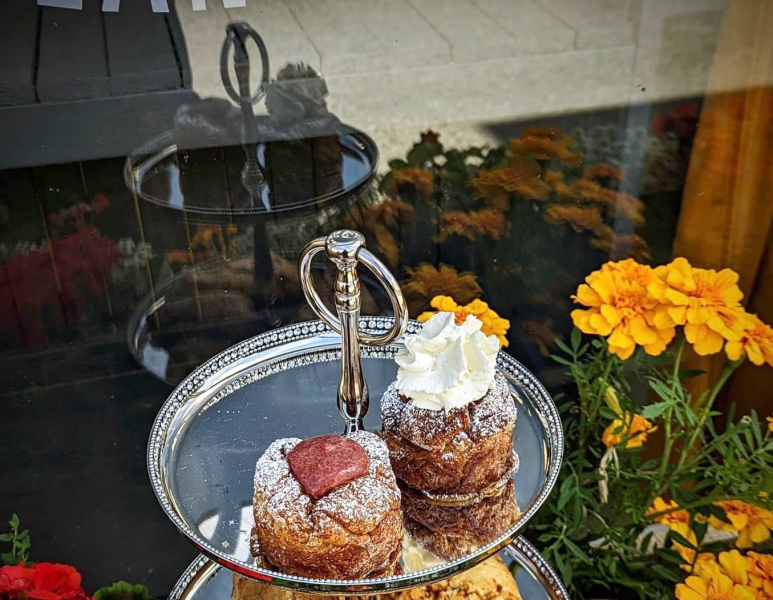 Kouign-amann is a Brittany specialty that falls into the category of “it's so good you don't want to know the ingredients”.

Let's stop playing secretive: kouign-amann literally means “butter cake”. Here you have a nice clue of the composition of this treat! If, originally, it was a way to recover the bread of the day before, today, we find it in all its forms – which have in common the butter.

Here are some suggestions for bakeries and pastry shops that offer either the classic version or the revisited version.

Here, the pastry chef André is proud to offer the most traditional recipe there is, honoring both his origins and the house where he learned everything: La Maison du Kouign-Amann, in Concarneau, Brittany. We are actually treated to a separate layer of batter, butter and caramelized sugar, which gives the desired crunchy texture on the top and ends, then melts with butter in the center. A real sin.

This pastry shop, located in the heart of Plateau Mont-Royal, was one of the first to serve the traditional kouign-amann. For more than 30 years, people have been going there early in the morning to taste it at its best (still hot!), especially since after 11 a.m., the stalls are often empty. To avoid any unpleasant surprises, it is recommended to book at least 24 hours in advance, by telephone.

At Boulangerie Jarry, the kouign-amann is not made in a completely traditional way, which gives a different, but equally decadent result. Instead of rolling (folding) bread dough in butter, the pastry chef works the croissant puff pastry directly by rolling it up on itself like a snail, then baking it in a mold with brown sugar, which which will allow the caramelization. The result is very famous to say the least and seems to be greatly appreciated by Quebecers, since this version is more and more common.

Les Bâtards was born last spring, following a desire to perpetuate the offer of an artisan bakery in the heart of downtown Sherbrooke. Home to La Mie Couronne for more than 25 years, it is now the turn of three young restaurateurs – including the owners of the locavore restaurant L’Empreinte – to take over. Here, even if the kouign-amann is not traditional (made from a yeast dough), that does not prevent it from being one of the best sellers since day 1. It is just as crunchy, but more airy, which allows you to garnish it with seasonal ingredients.

►Tommy Dion is a food columnist/critic and founder of the web platform and gourmet guide www.lecuisinomane.com.