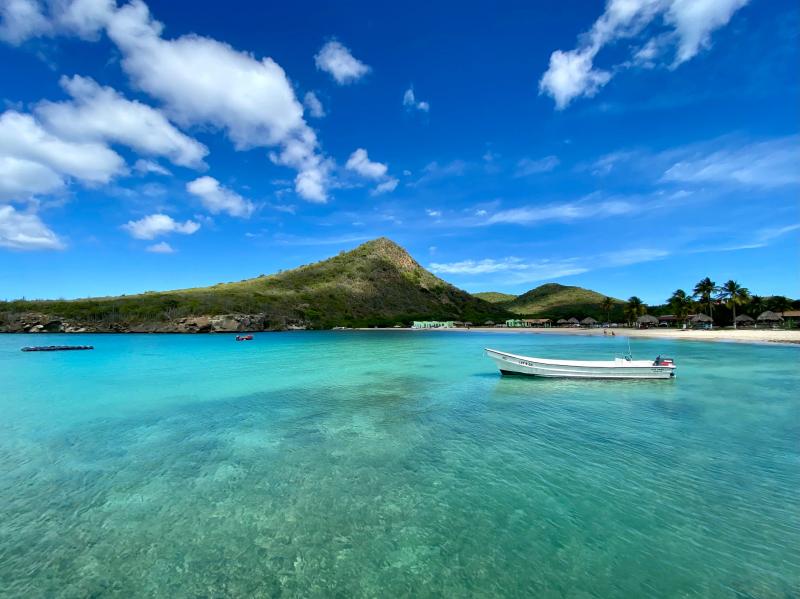 WILLEMSTAD, Curaçao | The beaches on the island are simply spectacular! The water is translucent and there is something for everyone.

Snorkeling enthusiasts will be served by the coral reefs and many wrecks, in addition to be almost guaranteed to see turtles near the seagrass beds.

Those who like action will find what they are looking for at the popular beaches of Mamboo and Zanzibar, or at the many beach bars, such as Kokomo and Pirates Bay. Short hikes or private boats lead those who prefer to be alone in the world to small hidden beaches where you will not meet anyone on weekdays… or only one if you are “unlucky”!

You like to cover miles by walking on the beach? It is important to specify that those of Curaçao are generally short and narrow. But, don't worry, we offer you its little sister on a silver platter: Klein Curaçao!

Sunset on the beach of Porto Marie, one of the longest on the island.

While the blue background of the Curacian flag symbolizes the sky and the sea, and its yellow stripe represents the sun, its two stars evoke its two islands: the main one and Klein Curaçao.

A perfect day getaway, this little gem of nature can be reached within an hour by boat. I strongly recommend Blue Finn for the stability and characteristics of its catamarans.

Uninhabited, Klein Curaçao was used by the West India Company in the 17th and 18th centuries as a place of quarantine for slaves. There are wrecks and the most beautiful desert beaches of white sand in Curaçao, where you can walk endlessly, overlooking crystal clear water… and never want to come back! A popular dive site, it is also the birthplace of many sea turtles.

The first lighthouse built by Prince Hendrik in 1849, destroyed and rebuilt several times, offers a beautiful view of 360 degrees on the island.

View from the top of Christoffelberg, the highest point of the island

The climate of the island is very arid: its cactus flowers and its reptiles will impress you more than its greenery.

Its highest peak is only 372 meters, but hikers will still enjoy it, especially in Christoffel National Park and around the port of Spaanse Water, from where there are breathtaking views of several bays and islets.

Almost every day, around the Salt Lake of Willembrordus, flamingos await you.

TOURS TO DISCOVER THE ISLAND

THE LESS CROWDED BEACHES WHERE TO GET LOST

view of a natural aquarium during the hike starting at Santa Cruz beach.

The infinite swimming pool of the Saint Tropez Ocean Club.

Visa:No visa required for stays of 90 days or less.

Weather: You can visit Curaçao all year round and the rainy season is not really a rainy season. The temperature is always pleasant (annual average of 28.5°C and 27.5°C for water). The driest period is from February to June and the high season between December and April.

Getting there: Direct flights Montreal-Curaçao last 5:15 a.m. (high winter season). Flights are also offered year-round with a stopover in Toronto or via American cities.

Getting around: Public transport is quite frequent around the city center, but it is strongly suggested to rent a car to visit the outlying sites. Book in advance: rentals are expensive and cars are limited. Advance Car Rental provides exemplary service.