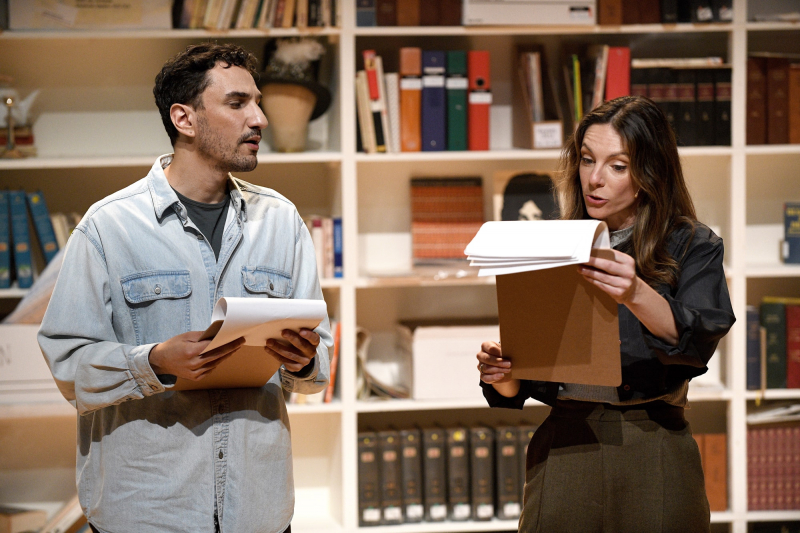 Bringing together the two linguistic solitudes has always been difficult in Quebec, and the piece Cyclorama tackles it, no without difficulty.

The course of the play, written and directed by Laurence Dauphinais, is out of the ordinary. Bilingual and entirely subtitled, this work is divided into three parts which take place in three different places. The audience is first invited to the Centaur for the first act, where we learn more about the history of this English-speaking institution and the evolution of theater in Montreal on both sides of the language barrier. Then, the public embarks on a bus. This trip is an opportunity to listen to an audio tape. Finally, the Center du Théâtre d’Aujourd’hui is the destination in which the triptych ends.

To dissect the two theatrical realities of Montreal over time, the person in charge of the documentation center of the Center for Dramatic Authors (CEAD), Alexandre Cadieux, and Erin Hurley, professor at McGill University, specializing in Anglo-Quebec theatre, are on the scene. With ease, they are at the heart of the show which sometimes looks like a classroom.

Laurence Dauphinais' alter ego is the actor Antoine Yared, who has had a career in English for ten years. years in Ontario. They confront each other throughout the story as has been the case between Francophones and Anglophones since colonization.

In order to portray the two linguistic solitudes, this piece also examines the personal life of the creator as well as that of her companions on stage. We therefore find ourselves mixing the history of theater in Montreal with the more general realities of Montreal's duality while addressing aspects of their experience.

This leads to a proposal that is certainly original, rhythmic and dotted with humor, but which is unnecessarily dispersed. Despite some interesting points, the historical content lacks flesh. This documentary section contains few anecdotes and is constantly interrupted by other forms of interaction, in particular to emphasize that Francophones and Anglophones are different, which everyone already knows.

There is surprising to see that we talk as much about the Stratford festival in Ontario as about Gratin Gélinas or Michel Tremblay. Fictional asides don't quite make the show entertaining. And the rather banal personal testimonies do not move and provide little information.

Despite its good intentions, this show does not seem to find its place. Perhaps Anglophones and Francophones will agree on this?

♦ Cyclorama is presented at the Centaur and the Center du Théâtre from today until November 5.