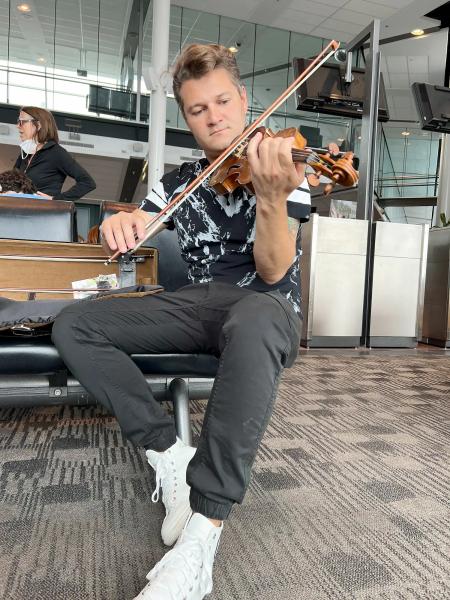 Bogota, Colombia – Alexandre Da Costa thinks big. The artistic director and regular conductor of the Longueuil Symphony Orchestra has dreamed up, imagined and planned a ten-day tour of South America which will begin with a first concert in Bogota on Thursday. This is the first tour outside Canada for the symphony orchestra that the internationally renowned maestro has been conducting since 2019.

Members of the Longueuil symphony orchestra at the top of the Monserrate, one of the places receiving the most tourists in Bogota, with a height of 3152 meters.

Scheduled for 2020, the first international tour of the Longueuil Symphony Orchestra had to be postponed due to the pandemic. However, it will be in the same famous theaters and the same initial cities of Colombia and Brazil that Alexandre Da Costa and 33 musicians of his orchestra (which usually has 52) will perform this week. The conductor and violinist will play and conduct, as usual, with his Stradivarius valued at more than 5 million dollars (see other text below).

Alexandre Da Costa, his wife Martine Carinal and their son Mattenzo, 8 years old at the top of Monserrate.

If the traveling soloist and conductor has chosen to return to settle in Quebec (after having lived for 14 years in Spain and 4 years in Australia where his son Mattenzo was born) and to take control of the Symphony Orchestra of Longueuil is that the challenge was extremely motivating for him.

“Everything had to be built,” explains the Montreal-born musician. I had experienced many things in my life as an artist such as being an international soloist, teaching and being a conductor for special projects. I wanted to experience yet another challenge, but this time in Quebec. A unique project that I could build from scratch. »

Taking advantage of the break with the past that the departure of the previous conductor, Marc David, caused (after 25 years of direction), Da Costa found attentive ears within the organization of the Longueuil Symphony Orchestra.

“I needed people to be willing to take risks and accept new approaches,” he continues. I told them that I wanted to tour, record and create something unique in our country and in the world. We spoke the same language. »

Getting off the beaten track

Ukrainian cellist Kateryna Bragina joined the Longueuil Symphony Orchestra a year ago. Here on a plane to Bogota with his instrument.

Why South America? For the adventure, the pleasure of getting off the beaten track of what is traditional in classical music, the Spanish that Da Costa speaks perfectly, the astonishing musical culture and the trip so dear to the 42-year-old conductor. For relations too, while working with Damian Rovner, his agent in South America for ten years.

Musicians from the Longueuil Symphony Orchestra on a tour trip to Colombia and then Brazil.

“Traveling pushes us to be proactive and to surpass ourselves as artists, far from our slippers,” he says. This awakens something in musicians. They can't believe they are in South America! I wanted to change the mission of the orchestra with, among other things, travel. »

Conducting on the violin

Recognized for “shaking the cage” of classical music lovers with his non-traditional ways of doing and thinking, Alexandre Da Costa is also one of the four conductors to conduct with a violin in the world. And not just any: a Stradivarius (*see other text)! He practices a conducting style called “steh geiger” (“standing violinist” in German).

If the program he has imagined for this tour in Colombia and Brazil is less extravagant than what he is presenting in Quebec, it is because the invitation comes from a series of international concerts in a more classical style. Da Costa, however, promises a tiny wink that should raise some eyebrows; including a final piece directed by… his 8-year-old son!

“I want to build, make changes, take smart risks and have a long-term impact on the orchestra I want to see grow and evolve by the end of my mandate [scheduled for 2029]. Above all, I want us to assert ourselves, because the arts have the mission of creating emotions! »

The concerts of the tour in South America< /h3>

Travelling with an instrument worth more than 5 million dollars

On tour, Alexandre Da Costa never leaves without his Stradivarius. “I know my instrument like the back of my hand and when I'm on the move, I never take my eyes off it,” he explains.

It's been four years since the chef of orchestra received this incredible loan from Quebec patron Guy Deveault. Worth “more than $5 million”, the very rare instrument has its own insurance covering all its travels around the world (representing 0.2% of its value).

Is it stressful for Da Costa to travel with this violin-work of art? “Not so much, because I'm used to it and forgetting such an instrument would be impossible,” he says. There is also no real resale market or an extremely rare black market – if ever I got it stolen.

A plane ticket for a violin

The rigid travel case of Alexandre Da Costa's Stradivarius is worth a few thousand dollars.

By plane, the Stradivarius travels in a special case – rigid and worth a few thousand dollars – in the cabin with the conductor.

To recognize the rare object, in addition to its unique sound, you can look inside to discover the label mentioning the year of manufacture and the name of the famous Italian luthier Antonio Stradivari (known as Stradivarius).

As for the other instruments traveling during this tour with the musicians of the Longueuil Symphony Orchestra, they all serve as hand luggage. Only cellos need to bring their own ticket, as they need their own seat on the plane.