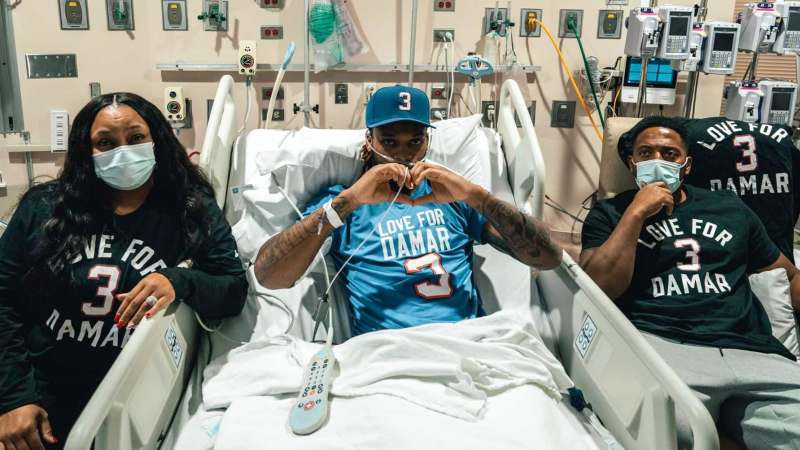 The victories follow one another for Damar Hamlin. The Bills announced that the 24-year-old returned to Buffalo, a week after suffering cardiac arrest on the field that required several days of hospitalization.

“We are excited and proud to announce that Damar Hamlin has been released from the hospital and has returned to Buffalo. He is doing well and this is the next step in his recovery,” the team revealed in a statement.

Hamlin had been at Cincinnati University Hospital Center since the terrible events on Monday last night, occurring during the first quarter of the game between the Bills and the Cincinnati Bengals.

Last Thursday, the marauder regained consciousness without neurological sequelae and since then the good news has been coming and going. On Friday morning, doctors stopped the intubation.

“Damar had his first walk in the hospital on Friday and he is on a recovery trajectory described as normal to accelerated. We continue to be ecstatic about his recovery,” said Dr. William Knight IV, noting that he seemed ahead of the process compared to similar cases.

For his part, Damar Hamlin has not yet spoken publicly, but he has continued to express himself through his Twitter account.

“I return home to Buffalo today with a heart filled with love,” he wrote.

“Seeing the world unite around me on Sunday was an incredible feeling. This love that you have shown me is the same that I want to give back to the world and even more. It's bigger than football,” he continued, before thanking the medical staff who took care of him.

“I am grateful for the fantastic care I received in Cincinnati. I'm glad to be back in Buffalo now. The nurses and doctors at Buffalo General Hospital already make me feel at home.”

So far , Damar Hamlin continues his work of physical rehabilitation and he is eating normally, according to what doctors have suggested.

He experienced powerful emotions on Sunday when the Bills triumphed over the Patriots by 35-23, at Buffalo. He was able to watch the game on TV with his parents at the Cincinnati hospital.

“When the Bills scored a touchdown on the kickoff return to open the game, he got out of his chair and started jumping. I think he cleared all the alarms in intensive care!” testified Dr. Timothy Pritts.

The sequence of events

At this time, the doctors who have treated him believe it is still too early to say when Hamlin might return to normal life, but believe there is no reason to believe he will not. continue to progress.

As for the possibility that Hamlin could join his teammates in Buffalo so that the Bills fans pay tribute to him, the medical team indicated that the nursing staff Buffalo will be in a better position to provide that answer eventually.

Hamlin will continue to be monitored at the hospital in Buffalo and will undergo further tests, but under the circumstances, it is difficult to imagine further more joyful.