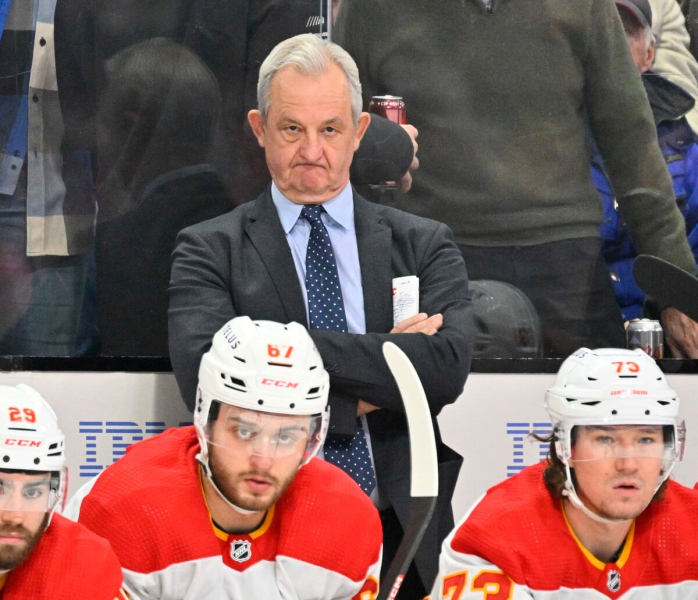 You have to believe that the presence of Jakob Pelletier in the environment of the Calgary Flames did not please Darryl Sutter at all.

It even annoyed him.

As proof, for two weeks, he made him poirot on the gallery of the press.

Why did you recall the young man who dominated the American League then?

Probably because he has a small size. That it does not correspond at all to the management advocated by the Flames coach. But senior management, due to the playoff race which promises to be grueling until the very end, has decided to add depth to its workforce. And who else but Pelletier, the organization's best skater in the minor ranks, to give more backup if injuries ever thwart the company's plans.

It was quite legitimate as decision especially since over the years the Flames have not shined too much in the record of recruited players. In fact, on Saturday, Pelletier was the first player selected by the Flames in the first round to appear in an NHL game in the past five years.

But, for two weeks after his recall, Sutter never spoke of Pelletier. On the contrary, he was irritated by the reaction of fans and journalists who questioned him about when Pelletier would play a first game. No doubt strongly advised by general manager Brad Treliving, it was decided to insert Pelletier in the lineup for the game against the Lightning.

But Sutter never announced the news.

< p>On Friday, during the daily press briefing, he delegated Kirk Muller to answer questions. Regarding Pelletier, the door was left open without confirming that he “would be in the game”.

However, Jakob's family had received a call from his son informing them of the wonderful news. He was about to enter the NHL. An unforgettable moment.

The veterans of the team demonstrated in their own way. As tradition dictates, they left the entire playing surface to him before the warm-up period. A magical moment for a young hockey player.

Sutter's reaction should prompt senior management to consider their coach's attitude. Humiliating a first-round pick or any young player who reached the NHL shows a flagrant lack of respect.

The young man had just lived a dream… even if Sutter had limited him to less than seven minutes of play, despite a first appearance where he almost thwarted Andrei Vasilevskiy. After the game, Sutter behaved like a complete idiot, like an irresponsible and disrespectful coach, and we can assume that the management of the Flames surely took stock with him.

Because he planned it all. He prepared a scenario where his stubbornness towards the small players dictated to him each of the sentences pronounced with a dose of contempt.

Don't believe that the veterans of the team, in particular Jonathan Huberdeau, flayed by Sutter this season, enjoyed the coach's number.

Moreover, Andrew Mangiapane, questioned on the first game of Pelletier, and undoubtedly informed of the words of Sutter, said: “I would say that in his first appearance, he set the tone for the game. We have to believe that we were inspired since we dominated throughout the game.”

The big winner will be Pelletier. The young man has character, he is persevering, he wants to see his dreams through to the end.

And Sutter left a very bad image of a coach with outdated methods.

Jeff Gorton and Kent Hughes have no intention of changing their business model.

Cole Caufield and his 26 goals leave a huge void, but nothing will change. We will continue the development of young people, we will ensure that we stay the course in order to give a new culture to the organization and we are already seeing interesting results.

Why should we change the daily training management?

This will be an opportunity to allow some players to improve their status within the company, didn't Josh Anderson offer a solid performance on Saturday against Toronto? And Samuel Montembeault impresses, Kirby Dach takes more and more insurance and confirms that he has the talent to become a high-level center player. The door will also be open to other skaters and they will be able to leave a solid impression after spending the first half of the season in Laval, including Raphaël Harvey-Pinard.

On the other hand, why does Jordan Harris play less than 12 minutes per game? Are we holding him responsible for losing the puck to Mitch Marner? Yet when you look closely, Edmundson's pass left the young defender in a vulnerable position.

As the trade deadline approaches, Kent Hughes will be in talks with his counterparts as he continues negotiations with agent Pat Brisson on the terms of a multi-season contract with Caufield.

Hughes must have been asked by some general managers about Jœl Edmundson and Sean Monahan. No doubt some teams will inquire about the status of David Savard. Joel Armia? An interesting case, as long as he recovers quickly.

In short, the next few weeks will surely have some surprises in store for us. And so far, Kent Hughes has quickly made his mark and he remains a formidable negotiator. ” alt=”Darryl Sutter: contempt, disrespect and stubbornness ” />