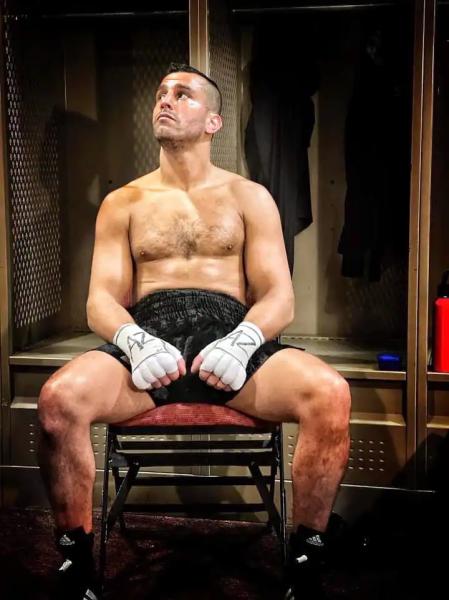 David Lemieux had a flat voice when I spoke to him at noon yesterday: “I'm pretty much in shock,” he said first. “Learning that your father died while being shot while waiting for the bus is quite a shock,” he continued.

The same morning, he had posted a brief message on Instagram to publicize the tragic event. With a photo of his father, André Lemieux. Then, in the morning, he visited his grandmother to comfort her: “Everyone in the family is upset”, he added.

We chatted a little. David was closest to his stepfather, whom he grew up with, but he met his father from time to time. And then, without warning, perhaps just by terrible chance, his children lost one of their grandfathers.

Camille Estephan, first manager and then promoter of Lemieux, spoke to him several times during the day. David Lemieux holds a special place in Estephan's heart. As Estephan said, David is family: “David is solid, but these are life-changing events,” he said as he hung up, after speaking to his boxer.

In fact, everyone who knows Lemieux the least bit was shocked when they heard the news revealed by Le Journal.Many wondered what the motives for these two murders were.

In fact, André Lemieux would have been the victim of a gratuitous murder. As was the case of the young Daniel Desrochers 25 years ago, when a car bomb exploded during the war between the Hells and the Rock Machines for the control of drug trafficking in Montreal.

THE REACTION OF THE AUTHORITIES

25 years ago, the death of the child revolted the population and prompted the leaders of Quebec to seriously attack the motorcycle gangs.

André Lemieux was shot dead in the middle of the street on Tuesday evening.

The death of André Lemieux and another victim sparked outrage yesterday. If we start shooting at random in the streets of Valérie Plante, the population can no longer feel safe in the city. People start talking loudly and expressing fear and anger. This is where politicians usually find a bit of courage.

Some of these fights should be done. Jean Pascal against Adonis Stevenson, we dreamed about it for two years. It never happened even though Jean Pascal launched ten challenges to Stevenson.

Mary Spencer against Marie-Ève ​​Dicaire, we dream of it as we dreamed of Jean Pascal against Lucian Bute. If it weren't for Camille Estephan and Mary Spencer, we'd have this fight as a Christmas present.

Yesterday, the International Boxing Federation, the IBF, installed Mary Spencer as the number one contender for the title of Marie-Ève ​​Dicaire. The IBF is arguably the most serious federation of the four majors. and quickly demands a title defense against his number one which automatically becomes a mandatory defense.

Camille Estephan has nothing to do with the dodges of the Dicaire clan: “So much the better, if Marie-Ève ​​Dicaire can win another belt, it will be our pleasure to win them all on the same evening ” , he says, speaking of Mary Spencer.

Mary Spencer, who lives in Montreal with her partner, made a giant leap in credibility by knocking out Chris Namus in less than two minutes. She had lost a ten-round fight against Marie-Ève ​​Dicaire on December 1, 2018 at the Videotron Center.

Yvon Michel is really in no rush for a title defense against Mary Spencer. And if ever, at the beginning of 2023, the IBF formally demanded it, we could organize the fight: “ But it is I who have the champion. Camille Estephan would have to agree to see one of her athletes take part in a promotion organized by GYM. We saw it with Simon Kean against Oscar Rivas, he rejected the idea”, said Yvon Michel.

“It's not true, I never received any offer for Simon Kean, » supports Estephan.

It confirms that if the fight went to auction, it would be very tough…

NOT AFRAID AT ALL

< p>Many observers believe that Marie-Ève ​​Dicaire would rather retire than face Spencer. Yvon Michel brushes aside these stories: “Marie-Ève ​​went to face Claressa Shields in Flint, a toffe town in Michigan and she was not afraid. It's not Mary Spencer in Montreal that's going to scare him,” said Michel.

Whoever the promoter, wherever in Quebec, Dicaire against Spencer will interest and excite boxing fans. And the general public too.

This is precisely what boxing in Quebec needs.