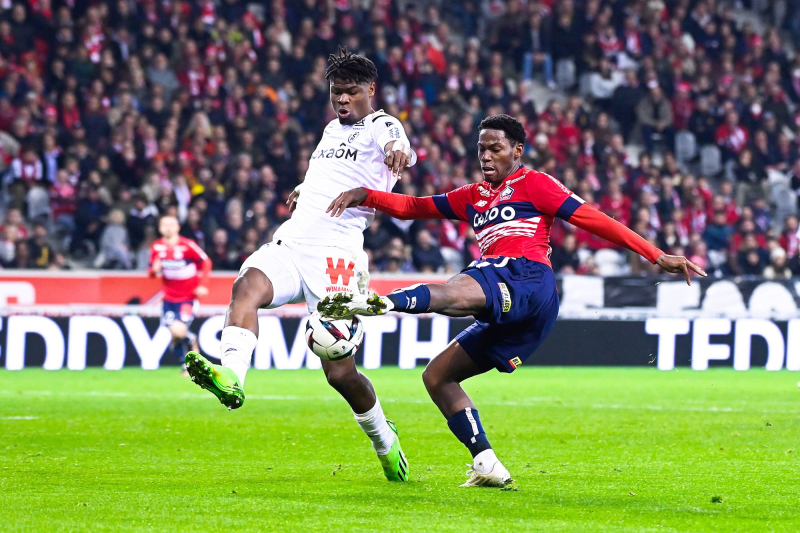 Kylian Mbappé may be the top scorer in Ligue 1, but he still gets his buttocks heated by a Canadian. He feels Jonathan David's warm breath on his neck and he might even read David's name in front of his on weekends.

The French striker was the king of World Cup goals with eight paid strikes. He also dominates the scoring charts in France with 13 success after 19 games.

But Jonathan David isn't slowing down in the north of the country with 12 goals. So, as one commentator mentioned, he could well overtake Mbappé over the weekend.

Both attackers will be in action on Sunday. David and Lille (6th, 10-5-4) will be on the side of Nice while Mbappé and Paris Saint-Germain (1st, 15-2-2) will receive Reims at the Parc des Princes.

David is therefore just behind Mbappé with 12 goals scored, which puts him level with Terem Moffi of Lorient.

What must, however, make a little velvet for the Ottawan is to note that he is ahead of a certain Neymar in the ranking of the top scorers.

Mbappé's team-mate has hit the target 11 times this season, tied with Wissam Ben Yedder of Monaco and Alexandre Lacazette of Lyon.

If we look a few lines down, we find the name of Lionel Messi in 11th place with eight goals.

David, a young man from Ottawa, let's remember, is a delight for fans from Lille since he arrived there, in 2020.

Last weekend, a brace against Troyes allowed him to become the first foreign player to reach the 40 goal mark in a Lille jersey in Ligue 1.

Let's just say it's a nice gift which he offered himself since he celebrated his 23rd birthday on Saturday, the day before this final victory of 5 to 1.

David has been consistent like a metronome since joining Lille. In 2020-21, he scored 13 goals and added 15 more last season. With 12 victories already and half the season still to go, he is sure to have his best year of his career.

David is deadly around the opposing goal and not only when he lands one of his powerful shots.

He also knows how to be dangerous on the ball in order to prepare the field for his teammates.

He also has four assists, which places him alone with Mbappé in the exclusive group of players who have been involved in at least 15 goals in the last three seasons.

On these beautiful statistics, we advise Lille to take advantage of David while he is there since he is likely to migrate to a more prestigious club in a transfer at an indecent amount in the rather near future.

When talking about a prestigious club, it's hard to find better than Manchester United, where almost all the big names end up going to one day or another.

It seems that the Red Devils are salivating at the idea of ​​getting their hands on him. The English club do indeed like prolific and high-profile strikers. David is also quite beefy, his physique seeming tailor-made for the Premier League.

The principal has previously said he's not sure if he “sees himself anywhere other than the Premier League.” ;”.

According to various sources, Lille would agree to part with their star player in return for the sum of 50 million euros (C$72.7 million).

Former Montreal Impact coach Jesse Marschis in turmoil at Leeds United. His side sit just two points above the Premier League relegation zone and there are rumors of mutiny among his players. Yet it's not all black as Leeds won their first FA Cup game in six by beating Cardiff 5-2 on Wednesday. Despite everything, the doubts remain, but Marsch, with the determination that we know him, will fight them. “My squad is united, but I know it's hard for everyone to be patient and I'm the one in the hot seat if we don't get results,” Marsch said after the encounter. “These rumors that the players have turned on me is horrible mush for the cats.”

Memphis between Barcelona and Madrid

This is about Memphis Depay who should change his address shortly since the FC Barcelona striker should go to Atlético Madrid. There was indeed an agreement in principle between the two clubs earlier this week. There is talk of a transfer fee of three million euros, which is a bargain in the case of a player like Depay, but as his contract expires in six months, Barca were not in a position. of strength. It appears that the Dutchman, who has amassed 14 goals in 42 games for Barcelona, ​​will sign a two-and-a-half-year deal with Atlético which will therefore be valid until the end of the 2025 season.

Former Italian national team member Dino Baggiothrew a stone into the pond after the deaths of Sinisa Mihajlovic (leukemia) and Gianluca Vialli (cancer of the pancreas). He argues that the culprit for these premature deaths is a widespread doping system in the 1990s. he advanced on the TV7 channel. I don't know if it's due to that, but there has always been doping. We never took weird stuff because there was a percentage that you have to respect. But over time, you have to see if certain substances are good or not, if they can be eliminated or they remain inside the body. I'm also scared, it happens to too many players. In my years, there was too much doping. »

Terem Moffi celebrates a goal for CF Lorient in a match against RC Strasbourg Alsace on November 13.

Terem Moffi is the league's second goalscorer with 12 goals, tied with Jonathan David. It is not surprising that the 23-year-old Nigerian striker is courted, he who currently wears the colors of Lorient (5th place). There is Olympique Lyonnais who tried it, as well as Nice who transmitted an offer of 20 million euros (29.2 M$ CA), according to The Team. Also according to the French media, the offers also come from abroad since West Ham United is ready to extend 25 million euros (36.4 M$ CA) to obtain his services.

Lens vs Troyes and Monaco vs. Marseille

Lens is second in the standings with
44 points, three less than Paris Saint-Germain (47) who have played two more games. A victory would allow him to warm up the back of the Parisians. Marseille (42) are two points behind Lens, a victory combined with a defeat for Lens and it is second place.

Arsenal are first in the standings
of the Premier League with 47 points and Man U are third with 39 points. A victory would close the race.
The Gunners are unbeaten in
five games and Man U haven't lost
in their last six outings.

Currently 8th in the standings with 26 points, Bilbao could make a nice leap since only two points separate him from Atlético Madrid and 4th place. As for Real (38 points), they could join Barcelona in the lead with a victory combined with a Catalan loss.

The two teams are tied on 23 points, with Torino holding the 9th in Serie A because their goal differential is better than Fiorentina by a tiny goal. It's a tight encounter that could mark a turning point for both clubs.