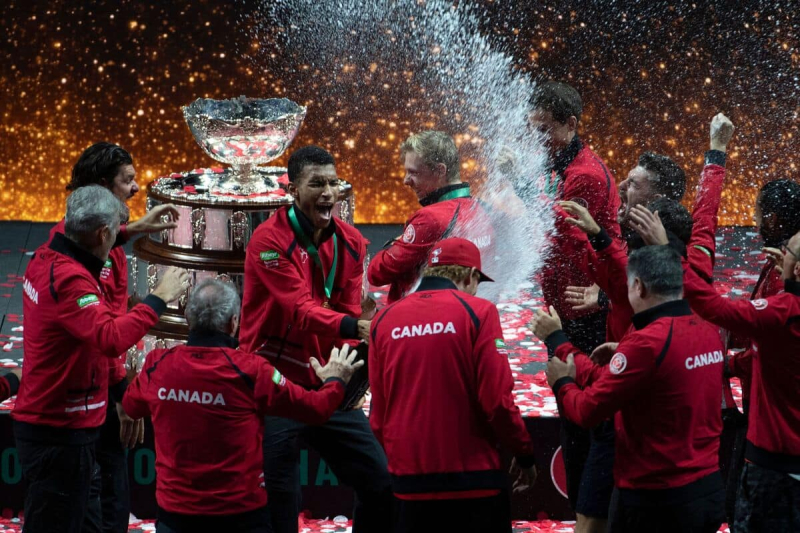 MALAGA, Spain | How was the Canadian team going to celebrate their first Davis Cup trophy? Captain Frank Dancevic claimed they had not made any concrete plans as of early Sunday evening Spain time.

But he knew what his players and they weren't going to do in the few hours they had left in Malaga: sleep! before our 6 a.m. flight [Monday morning],” Dancevic quipped.

A big bottle of champagne

After all, even if moderation tastes better, a first title in 109 years is celebrated in style. Especially for these top athletes who make sacrifices throughout the season.

Arrived in the press conference room of the Martin Carpena stadium some 10 minutes late at the time initially scheduled, Félix Auger- Aliassime and his teammates had already started celebrating. But it didn't show in their courteous and eloquent responses.

On the pitch, they were first given a huge bottle of champagne, which Denis Shapovalov was mandated to open, before showering his partners and offering them a few sips in turn, as desired. tradition.

“You know those big bottles you see on the field? We plan to find an even bigger one, ”said the captain.

And a few beers

Then, on his way to meet the media, Félix had a local beer, the Victoria Malaga, in his hand.

There was something comical about the scene, when you consider how much “FAA” is recognized throughout the circuit. ATP for his professionalism and rigor.

Félix Auger-Aliassime enters the conference room with a beer he hides under the desk 👌🏻 pic.twitter.com/VbdY7FxRPr

The Quebecer wisely hid his well-deserved Pilsen under the table, once seated in front of his little replica of the salad bowl. 'money.

“I think [Shapovalov] doesn't care about the length of my answers, also candidly declared Vasek Pospisil in full explanation to a journalist. I had a few beers!”

And as he has done since Thursday, Dancevic intended to lead the way for his young teammates in their festivities. “I think it will be a team effort,” he smiled.