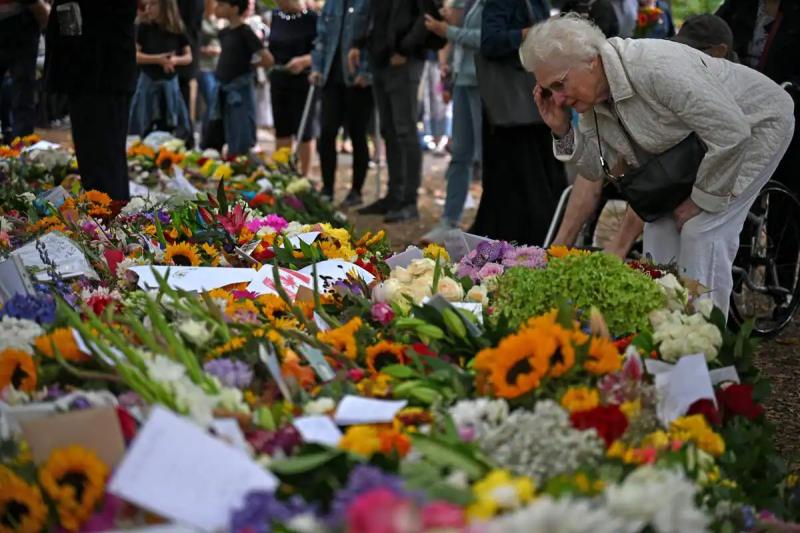 All night and again for hours on Tuesday, the British waited for hours to meditate in front of the coffin of Elizabeth II in Edinburgh before its transfer to London, where a grandiose farewell to the ultra-popular sovereign with record longevity in the history of the United Kingdom.

While the accession of Charles III continues in a Northern Ireland where Brexit has revived the specter of a bloody past, thousands of anonymous people pay a final visit to his late mother, bowing, curtseying, crossing himself or wiping away a tear in front of the oak coffin which rests in St. Giles Cathedral in the Scottish capital.

After a night of uninterrupted queuing, the waiting time was around two hours Tuesday morning, and seemed to shrink as the morning progressed.

Coming from Glasgow early Tuesday, Nataliya Dasiukevich, 46 and from Russia, says she is in a “very gloomy mood” and is struggling to hold back her tears. “I was not born in this country and I am far from my family. The queen was the closest thing to a grandmother for my child.”

“We are retired and we have always known her… It is very very important “, explains to AFP Lynn Templeton, from the north of England.

Placed on a dais and covered with the yellow, red and navy standard of Scotland, a wreath of white flowers and the solid gold crown of Scotland resting above, the coffin remained accessible throughout the night at population, guarded by four royal archers and protected by a cordon which keeps the public several meters away.

King Charles III and his three siblings, Princes Andrew and Edward, and Princess Anne, came in the evening with Queen Consort Camilla to observe a wake.

The photo of the children of Elizabeth II, back to the coffin, made the front page of all the daily newspapers on Tuesday. We see Charles in a kilt, his eyes lowered. “The King's Vigil”, headlines the tabloid the Sun. “The royal family united in grief” retains the Times. For the Daily Mail, “The King leads a nation in mourning”.

The body of Elizabeth II, who reigned for 70 years, had until Monday evening been kept away from the general public: first at Balmoral Castle in northern Scotland , where the monarch died on Thursday at the age of 96, and then at the royal palace of Holyroodhouse.

Popular figure, rock of stability in the sometimes political, social or health storm during the Covid-19, the queen was a reassuring image for millions of Britons during all these decades on the throne.

Succeeding him, Charles III began a tour of the four constituent nations of the United Kingdom, first with the British Parliament in London, then that of Edinburgh, before Cardiff, Wales, on Friday.

It is in Belfast that he goes on Tuesday with Queen Consort Camilla to meet politicians and receive condolences in the context of renewed community tensions since Brexit in this province bereaved by three decades of violence until the agreement of peace in 1998.

Retired Ann Sudlow got up at 4 a.m. hoping to catch a glimpse of the monarch and welcomed a certain unity in a divided province: “It's reassuring to see the communities rally behind the new king”.

Tensions in Northern Ireland, separatist desires in Scotland, galloping inflation which weighs on purchasing power, the new 73-year-old king, older than all the British sovereigns on their accession to the throne, settles in his functions in a moment critical. The country, in the grip of a serious social and political crisis, has had a new Prime Minister for just a few days.

The king will probably have to face the claims of some of his 14 other kingdoms (including in particular Australia, the Bahamas, Canada, New Zealand or even Jamaica) which could be tempted by a republican regime in favor of this change. of sovereign.

“I believe that is the direction that New Zealand will take at some point, I believe it is likely to happen in my lifetime, but I do not see this in the short term or something that is on the agenda for the near future,” said New Zealand Prime Minister Jacinda Ardern.

Continuing its last journey, the remains of the Queen will embark on Tuesday afternoon aboard 'a royal plane for London, escorted by Princess Anne.

He will be greeted on his arrival by King Charles and other members of the Royal Family.

He will pass the night at Buckingham Palace.

The second stage of presentation to the public will then begin, in London this time, which should see hundreds of thousands of people parade for just under five days 24 hours a day.< /p>

Two days before the opening to the public, the first settled Monday at the head of a line which could reach eight kilometers, noted an AFP journalist.

The The Queen's state funeral will take place on Monday attended by some 500 foreign dignitaries and many crowned heads. But according to the PA agency, Russia, Belarus and Burma were not invited.