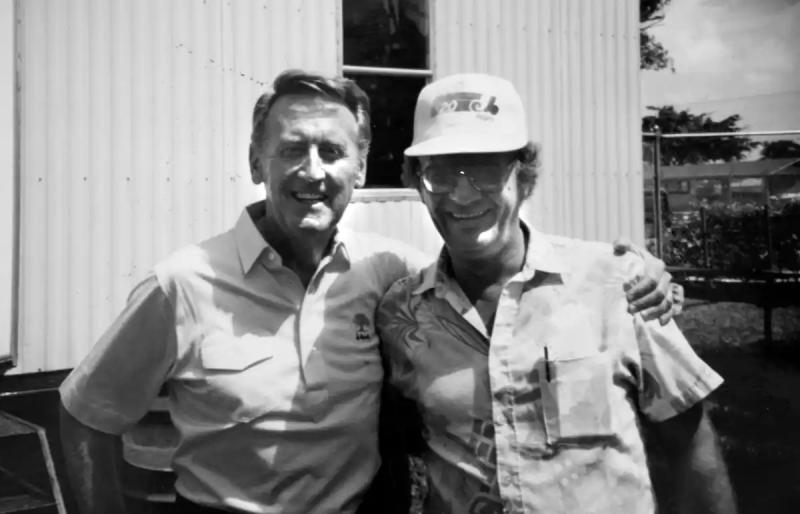 At the end of the line, Quebecer Jacques Doucet was flabbergasted when he learned of the death of the famous American sports commentator Vin Scully.

“I have just lost a friend, it touches me a lot, ”he breathed.

The sad news had fallen late, Tuesday evening. Considering his 94 years, everyone knew that Mr. Scully was going to leave soon, but the legend associated with the Los Angeles Dodgers is no less eternal for many baseball lovers.

“He is someone that I admired a lot, testified Jacques Doucet, who was notably the voice of the Expos for 33 years, from 1972 to 2004. He was a model, an inspiration in my profession, but as a human being too. He was an extraordinary guy, so affable and easy to approach.”

On his computer screen, Mr. Doucet has displayed for several years this precious photo of Vin Scully and himself, taken during a Dodgers training camp in Vero Beach.

“It was always a pleasure to meet him, before the games between the Expos and the Dodgers, we exchanged our data, added Mr. Doucet. He didn't hide anything, he was so honest and he was a professional through and through.”

Vin Scully, in English, and Jacques Doucet, in French, each described defining moments in major league baseball history in parallel. Rick Monday's famous home run at the Olympic Stadium in 1981, Kirk Gibson's long ball during the World Series in 1988 or Dennis Martinez's perfect game in 1991, to name a few.

“I remember that after the Rick Monday circuit match, he simply said to me: “very exciting game” (what an exciting match), said in turn Rodger Brulotte. He knew how sad we were, he was a respectful man.”

“Let's say he hadn't hit the nail on the head,” Doucet agreed, recalling the heartbreaking elimination of the Expos at the expense of the Dodgers.

Equally complimentary to the man, Brulotte had known Vin Scully from the beginning of the Expos, in 1969, when he was road secretary for the Montreal club in addition to being involved in promotion and marketing.

“Every time he met us Quebecers, he always said 'hello, it's nice to see you' in French,” recalled Brulotte, who had become a baseball analyst over the years.

< p>“He was the one who made me understand the importance of good commentary on a baseball game, he showed respect for the listeners no matter what time of a game, no matter if a game was crucial or not , no matter if the score was tight or it was a thaw, continued Rodger. At all times, he told me, give the best of yourself.”

Among his countless Vin Scully anecdotes, Brulotte recalls a scene where famed Montreal Canadiens player Maurice “Rocket” Richard was personally introduced to the Dodgers commentator during a baseball game at Olympic Stadium.

“Vin Scully already knew very well who the Rocket was, it was not necessary to name him when introducing him, told Brulotte. Vin knew who the greats were.”

Normal. Mr. Scully was one of them.

From One Generation to Another

Died Tuesday, Vin Scully was the Dodgers' sportscaster for 67 years. This means that he will have marked more than one generation, especially among people who exercise the same profession.

“I appreciated his way of telling stories and he had the gift of bringing out the good expressions at important moments,” noted Félix Séguin, who is a Montreal Canadiens game reporter for the TVA Sports network.

Séguin notably recalls the famous phrase uttered by the legendary commentator after Kirk Gibson's home run, on one leg, to end Game 1 of the 1988 World Series in a 5-4 victory for the Los Angeles Dodgers against the Oakland Athletics.

“In a year that has been so improbable, the impossible has happened,” Scully had launched.

In a year that has been so improbable, the impossible happened, dare we translate.

“He is the best commentator of all time, in all sports, slice Rodger Brulotte, about Vin Scully. During a match, his description was a long poem.”

While he has enjoyed several archival videos since, Séguin also mentions having discovered Vin Scully while listening to “For The Love of The Game,” a 1999 baseball movie starring Kevin Costner.

“His descriptions make the movie even better,” he said.

On Wednesday, it was still possible to see that the legendary sports commentator marked the sports landscape throughout North America. Several organizations, including the New York Yankees, took advantage of their home game to pay tribute to the memory of Vin Scully on the giant screen in their stadium.

Remember that before meeting in Los Angeles, Vin Scully was first assigned to describe Dodgers games in 1950, when the team was playing in Brooklyn.