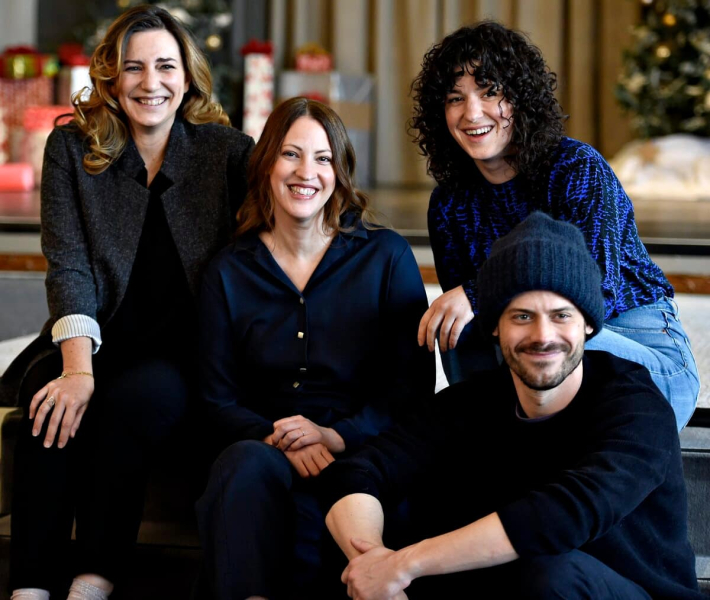 We owe the idea for this choral film to India Desjardins and the distribution has an impressive number of stars. But is that enough to stir things up?

Both a romantic comedy and a Christmas movie, this December 23 doesn't really manage to keep us alive the proverbial magic of the holiday season.

However, it is not the adventures or the characters that are missing, and this is perhaps the reason why the feature film leaves a feeling of overflow, of whirlwind without any real emotional attachment, nor of a significant humorous moment.

The anchoring is in the couple formed by Marie-France (Guylaine Tremblay) and Normand (Michel Barrette), parents of two daughters, Elsa (Virginie Fortin, sparkling) and Stéphanie (Catherine Brunet). Elsa is an author and the promotional tour for her new book is provided by Jessica (Catherine Souffront), her publicist. For her part, Stéphanie and her boyfriend Alex (François Arnaud, funny as an unoptimistic future father) are expecting a baby. As for Marie-France, she struggles to prepare all the dishes for a traditional and memorable dinner.

Antoine (Stéphane Rousseau, unfortunately a little extinct), a singer who is in the process of launching his album de Noël with the help of Jessica, also his public relations officer, is married to Madeleine (Marie-Hélène Thibault) and they have a son, Mikaël (Tao Vigneault). The latter wants to spend December 23 with his girlfriend instead of going to see The Nutcrackerwith his mother. And then, as if that weren't enough, we also find Chloé (Bianca Gervais) as the director of the Château Frontenac and her ex-blonde, Gabrielle (Christine Beaulieu, friendly) who is the chef; the two women share custody of their dog Maggie.

Yes, it's definitely a crowd at midnight mass! Especially when you add David (Sacha Charles), Elsa's childhood friend, as well as Normand's heart attack… and you can easily imagine the outcome of all these stories that will end with great twists and turns. far-fetched by overlapping in… 101 minutes (yes, that's short for so many parallel plots).

If you like to see again, especially at Christmas time, so many actors from our region brought together in a single feature film, the emotional implication is not there. We don't vibrate, we don't get moved, we don't “nostalgia” and we don't stampede with impatience at the approach of this month which is meant to be magical. Too bad!