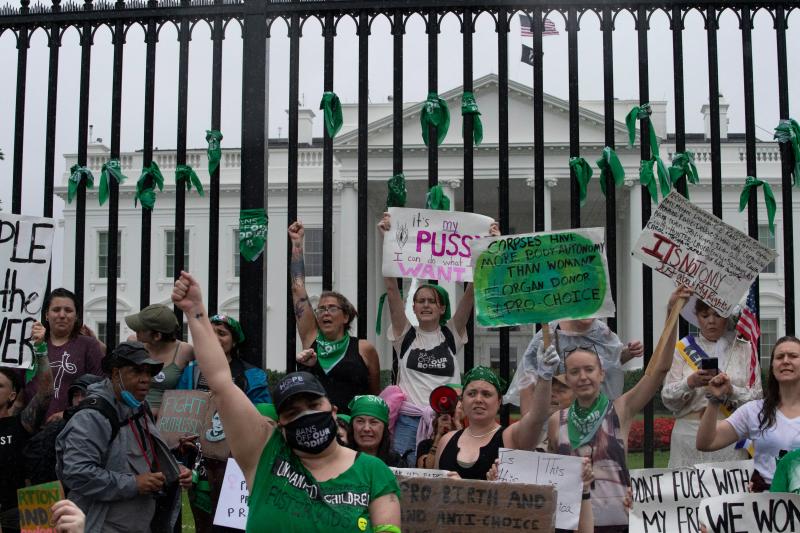 “Get up, Joe Biden!” About 1,000 people gathered outside the White House on Saturday to demand that the president more vigorously defend the right to abortion.

To cries of “My body, my choice!”, this overwhelmingly female demonstration made a short journey through the streets of the American capital, under a drizzle that turned into a downpour, to finish in front of the emblematic colonnaded building.

Where Joe Bide wasn't: He spends the weekend at his Delaware beach house, several hundred miles away.

That didn't stop Becca, 37, who preferred to give only her first name, from driving more than two hours to come and chant, “Get up, Joe Biden,” while holding up a sign that says ” abortion on demand and without excuse.”

What does she expect from the 79-year-old Democrat? “Let him fix it!” she exclaims, “I don't want the world my grandmother lived in.”

“The decree he issued was not enough”, she judges in reference to a text signed Friday by the American president, containing some measures with limited scope on access to voluntary terminations of pregnancy.

Behind her, demonstrators hang green scarves from the gates of 1600 Pennsylvania Avenue, recalling the fight of Argentine women for the right to abortion.< /p>

“He really needs to explore the full extent of executive power to ensure that women keep their rights,” asks Christine, 50.

“I'm here to make sure that my daughters are not going to go back 50 years to the time of clandestine abortions”, said this mother of three young girls, shortly before the demonstrators left the scene calmly, immediately replaced by tourists who photographed the signs left there, and that the rain begins to wash off.

Since the very conservative Supreme Court on June 24th dropped the right to abortion in force throughout the United States, the Democratic president is accused of not reacting vigorously enough.

Joe Biden argues that his executive power is limited, and that the best way to restore the right to abortion, including in conservative states that have already abolished it, is to pass a federal law.

For this There, he maintains, voters need to give the Democrats a solid majority in the November legislative elections.