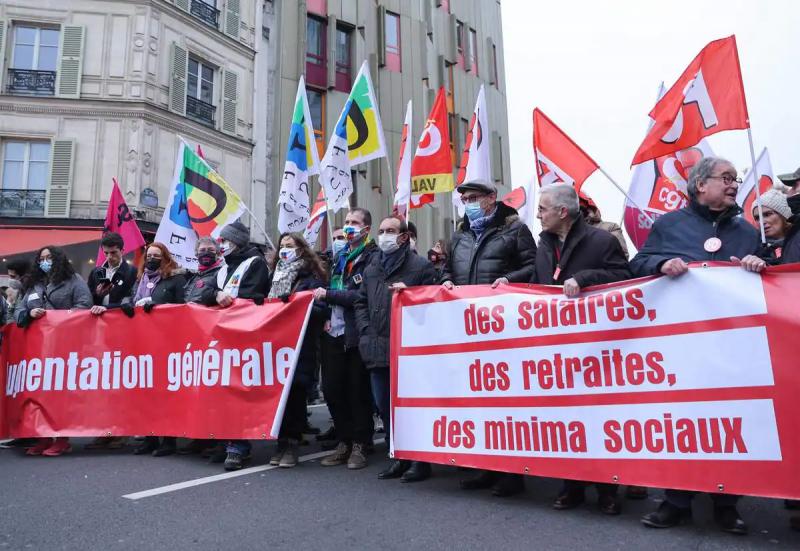 PARIS | The French government faces its first major test on Thursday, with strikes and demonstrations all over France for wage increases and against the announced pension reform, crucial for Emmanuel Macron who wants a bill adopted “before the end of winter”.

The French president, who intends to preserve his capacity to reform the country, does not rule out dissolving the National Assembly in the event of a vote of a motion of censure against the government, warned Thursday the French Minister of Labor Olivier Dussopt.< /p>

“If all the oppositions coalesced to adopt a motion of censure and bring down the government”, Emmanuel Macron “would defer to the French and the French would decide and say what is the new majority they want . And obviously (…) we would be campaigning for the president to be confirmed, ”said Mr. Dussopt, responsible for initiating new consultations on pensions from next week.

At least 200 rallies were planned throughout France for this first day of interprofessional mobilization since the start of the school year, according to Céline Verzeletti, confederal secretary of the CGT.

In the capital, a strong procession of several thousand people is left shortly after 2:00 p.m. (12:00 GMT) from place Denfert-Rochereau towards place de la Bastille.

The head banner proclaimed: “increase in wages, social minima, scholarships and pensions, it is urgent to act!”

Among the participants, union representatives but also elected officials, the left-wing parties having their support for this day of mobilization.

This is “a first warning to the government and the employers to start wage negotiations quickly” and to point out that the French people do not “want to work any longer,” CGT secretary general Philippe Martinez said in the protest.

The government will open a new round of consultations around the pension reform, with a view to adopting a bill “before the end of winter”, Prime Minister Elisabeth Borne announced to AFP, after a meeting Wednesday evening at the Élysée with the majority.

Emmanuel Macron, elected in 2017, has pledged to reform pensions in France after a first failed attempt during his first mandate due to the Covid crisis.

But the centrist liberal president lost an absolute majority of MPs in June after his re-election, complicating his task of pushing laws through parliament.

With deficits mounting and public debt skyrocketing, driven in part by inflation and public support for French purchasing power, the 44-year-old president says raising the the retirement age and the decline in unemployment are the only means for the State to increase its income without raising taxes.

Mobilization on the left

His government approved pay rises for civil servants and teachers and introduced one of the most generous anti-inflation safety nets in Europe, which capped energy prices for households and contain inflation.

But his insistence on raising the retirement age is met with rejection from the unions and the left-wing opposition and remains largely unpopular in the country.

“All the unions in France are against working until the age of 64 or 65”, reiterated Thursday the general secretary of the CGT.

As for taking part in the consultations planned by the executive as of next week, “if it is to tell us that we are discussing the extension of the retirement age, we will not last long,” he warned.

Disturbances are expected on the train, especially in the Paris region, but not on the Paris metro.