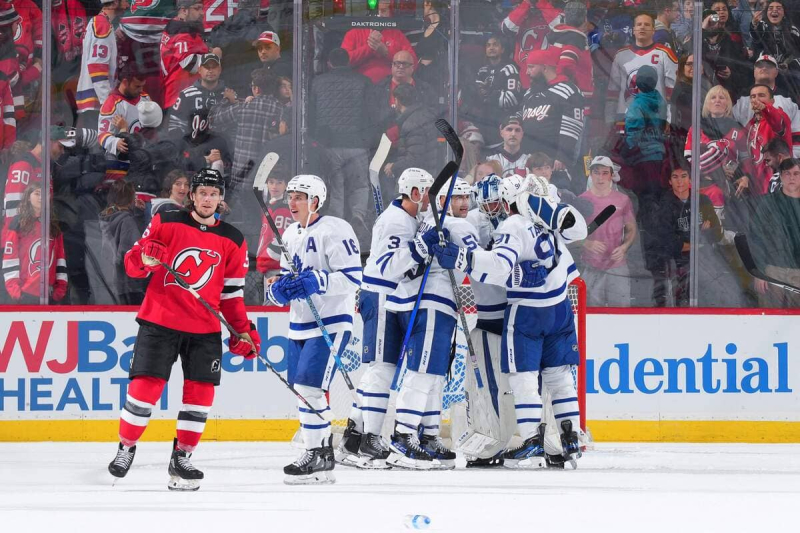 The Toronto Maple Leafs were finally able to solve the New Jersey Devils conundrum by ending their 13-game winning streak on Wednesday. This match, won 2 to 1 by the visitors at the Prudential Center, however took a strange turn.

On three occasions, the referees disallowed goals for the Devils. Twice, officials have ruled that contact with Matt Murray prevented the Leafs goaltender from making a save. And in the third period, an Erik Haula pass canceled due to intentional contact with the skate caused the crowd to lose their temper.

Devils fans threw dozens of objects on the rink, forcing both teams to retreat to the locker room. New Jersey eventually scored a legal goal with five minutes left in the game, but the damage was done.

John Tavares and Pontus Holmberg both flicked the lantern in 2:22 in First period. It was also the Swedish fullback's first career goal.

The Devils' winning streak thus ends at 13 games, they who had been able to equal their record of franchise on Monday against the Edmonton Oilers.

A Desert Storm in Raleigh

As for North Carolina, the Hurricanes were upset by the Arizona Coyotes, who shut them out 4-0 with a superb performance by Karel Vejmelka.

The Czech goaltender has recorded a second shutout in his last four starts. He blocked 36 shots in one of the best performances of his career. His vis-à-vis, Pyotr Kochetkov, was beaten three times on 25 pitches.

The latter agreed earlier in the day on the terms of a four-year contract extension, and he sometimes seemed to have wings. He notably frustrated Travis Boyd with his stick in the second period, making one of the best saves of the season so far.

The Coyotes were too strong, however. Nick Schmaltz, in his second game since returning to action, opened the scoring after 66 seconds. The visitors struck three times in the third period. Two of those goals came from Lawson Crouse's stick blade, while Nick Bjugstad completed the scoring.

In Florida, it was the special teams who had a say in the Panthers' victory over the Boston Bruins. It was a rare setback – a third this season – for Jim Montgomery's men, who escaped the game by a score of 5-2.

It was also on the power play that Charlie McAvoy and David Pastrnak hit for the Bruins. They came up against Spencer Knight, author of 37 saves in front of the “Cats” cage.