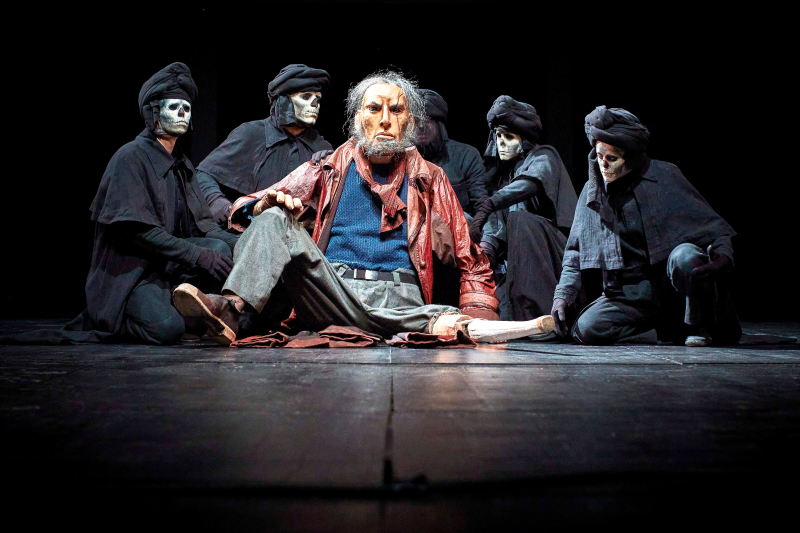 An ambitious production with actors, around 30 puppets of all sizes, musicians, projections and a life-size whale, Captain Ahab's quest for Moby Dick will come to life on stage du Diamant.

The adaptation of the novel by Herman Melville, published in 1851, produced by the company Plexus Polaire, will be presented for the very first time in Quebec and in North America, with performances on Thursday evening, Friday and Saturday.

Premised in Rana, Norway, in October 2020, Moby Dickhas been presented a hundred times, all over Europe, after being slowed down by the pandemic.

After working on the shows Opéra Opaque and Cendres, with Norwegian artistic director and puppeteer Yngvild Aspeli, Canadian Viktor Lukawski, originally from Toronto, was invited to participate in the creation of Moby Dick.

The Canadian puppeteer interprets Captain Ahab, other characters and brings to life, with colleagues, sea creatures.

“There is a small Ahab, another who is almost my height and a last, huge, which must be manipulated by several people”, he indicated, during a telephone interview.

One of the challenges of the puppeteer is to manipulate characters of different sizes, some of which , larger than life, with colleagues.

“We are between three and five people handling a giant whale. It is a collective work that must be coordinated in order to create realistic, fluid and coordinated movements. You have to have the same energy and become one body. It takes a lot of effort,” he noted.

Moby Dick is a large-scale show that looks like a feature film.

“We adapt ideas from the cinema and it works very well with the puppets. There are changes of scale with an Ahab that is almost three meters. It becomes like a close-up filmed by a camera. It allows you to see the details of the face. The musicians create an atmosphere that helps us understand emotions. It's a show that goes beyond the theatre,” said Viktor Lukawski.

Beyond the quest and obsession of a captain who wants revenge on a whale at all costs which crippled him for life, Moby Dick is also a great metaphor for the human experience.

“It's a show about desire and obsession. There is the presence of a boat, which travels alone in the dark and through the storms and which refers to the human experience. We can understand, even if we are not people who travel a lot by boat, this obsession and this desire of Ahab to arrive at the end of something. We all have moments like that in our lives,” he mentioned.

► Moby Dickis presented from 24 to November 26 at Le Diamant.