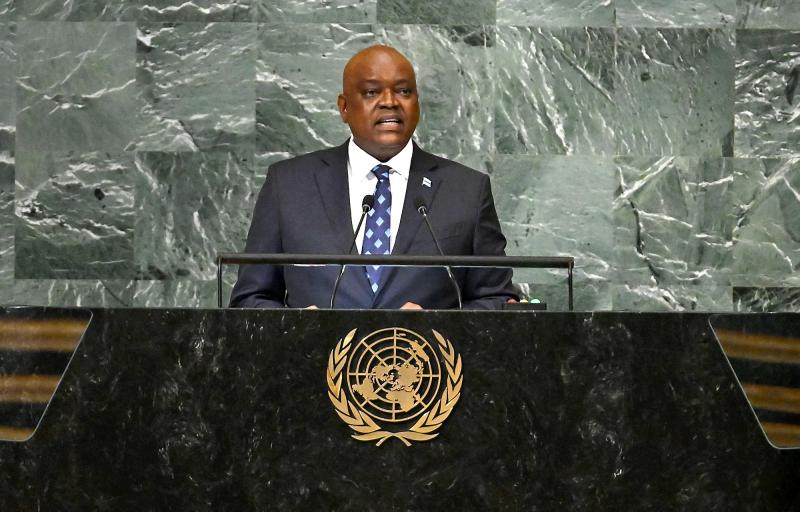 Swear words, we were given full speeches last week at the podium of the 77th General Assembly of the United Nations; from Joe Biden, accusing Russia of “trying to erase a sovereign state from the map of the world” (Ukraine, of course) to Emmanuel Macron, limiting current geopolitics to “a simple choice: that of war or of peace”.

Smaller countries, in a less dramatic way, have also marked the blow and forced the Western countries, the Europeans in particular, to face their contradictions. Botswana is one of them.

In a speech much less fiery than those of his counterparts in rich countries, President Mokgweetsi Masisi made a plea for new foreign investment, in order to diversify the economy of his country.

Marilyn Monroe sang Diamonds are a girl's best friend, but flirting stimulates Botswana just as much. Diamond mines bring in more than a third of Gaborone's government revenue, a fortune that President Masisi has no intention of giving up, despite his desire to vary the country's wealth a bit.

The diamond industry is at the heart of the “success story” that is Botswana. In 1966, the year of its independence, the former British colony – one of the poorest territories in the world – had, according to economists Daron Acemoglu and James A. Robinson, only twelve kilometers of paved roads, one hundred secondary and twenty-two university.

Today, considered a model of democracy, Botswana can boast of being one of only six countries in the last fifty years to be ripped from the official UN classification of least developed nations.

Thursday, during a “Diamond Gala”, organized on the sidelines of the UN General Assembly, President Masisi showed that this enrichment can continue without sacrificing its principles.

He has promotes a new partnership with HB Antwerp, a Belgian diamond producer, which could revolutionize the transparency of an industry notorious for its opacity.

Using “blockchain” technology, HB Antwerp expects to be able to show the precise origin of a diamond, per square meter, in order to prove to consumers that their purchase is not a “conflict diamond”, these “blood diamonds” which feverish wars in Africa each more cruel than the other.

However, there are “blood diamonds” that some refuse to name these days. Belgian diplomats, according to the respected online site POLITICO, managed behind the scenes to prevent the ax of sanctions against Moscow from falling on the Russian diamond industry.

For centuries, Belgium has profited from this industry: more than half of all the rough diamonds in the world are cut in Antwerp. And precisely, one in three rough diamonds comes from Russia, with the US Treasury Department estimating that they brought in more than $4.5 billion to the country.

With this savage war that the Kremlin continues to deliver to the Ukrainians, don't we get our hands dirty with these “conflict diamonds”? Especially since the alternative exists; talk to Batswana!

Landlocked in southern Africa, the country has no access to the sea.

Economy: 2nd producer of diamonds in the world