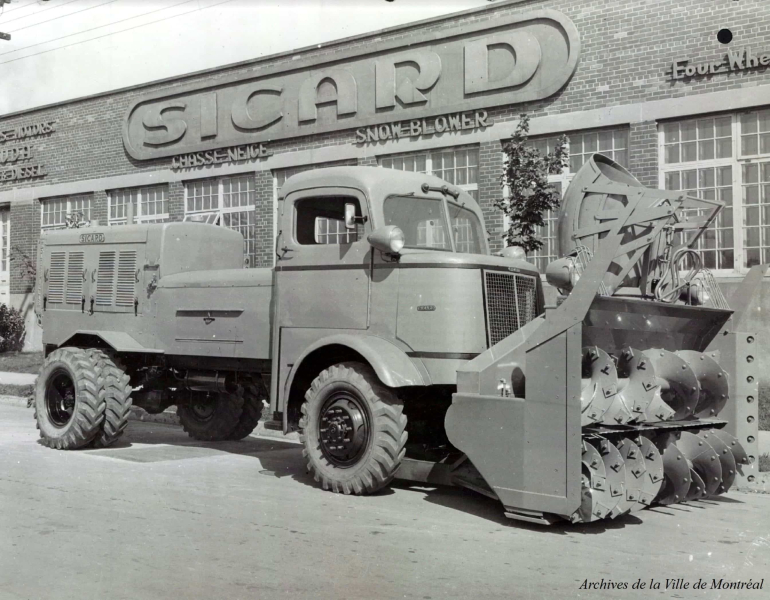 For us Nordic people, the invention of the snowblower a hundred years ago completely changed our relationship to winter.

Imagine what Montreal or Quebec was like before modern mechanical snow removal.

The horse-drawn carriages were equipped with skis. As for the snow in the streets, because it was unimaginable to remove it, we beat it. Basically, we passed a very heavy roller over it to compact it.

Thus, the white material was no longer an obstacle, but formed a kind of slippery floor.

Few of us remember the expression “I work on the snow”, said by the needy who played with the shovel to supplement their ends of the month. For their part, a hundred years ago, trains equipped with snow plows continued their incessant races.

As for automobile traffic, well… it did not yet exist! Who had a car in 1922, apart from the rich?

It was before the great popularization of the automobile. And the few motor cars stayed in their garages when the streets were clogged with snow.

It is said that necessity is the mother of invention and it is not without surprise that it was a milkman's son from Saint-Léonard, exasperated by the difficulty of delivering his pints of milk when the snow blocked the roads, who had the idea of ​​a machine to spit snow away… away from the road!

An ingenious inventor, Arthur Sicard (1876-1946) used the principle of the turbine specific to harvesters -threshers and adapted this process to snow.

In 1925, his first prototype was completed… But who would want such a monster snowplough?

The first snowblower, designed in 1925, did not yet have a very modern appearance.

It's hard to conceive these days, but cities have not embarked on this revolutionary invention.

Wouldn't it be necessary to accept fate snow that lays its great soothing cloak over the teeming life of men?

The human propensity to dominate nature nevertheless ended up making Sicard's ideas triumph. Is it a coincidence that it was the chic Outremont who first bought a Sicard snowblower in 1927 at a cost of $13,000? It was probably where the most private cars were found, these machines for the rich.

This first Sicard snowblower was used until 1952… but already its invention and its thousands machines had conquered the Nordic world.

Sicard had a factory in Sainte-Thérèse and, before that, a workshop in Ville-de-Maisonneuve, where a street now bears his name.

But because there is no link between the importance of the work and the notoriety of its author, Arthur Sicard quickly became, historically speaking, an illustrious unknown.

This man who achieved his milk delivery dream of having clear roads has at the same time cleared the way for the standardization of human affairs year-round.

That said, every winter, at certain times, the snow briefly regains its paralyzing majesty, when a massive broadside imprisons us under its shroud, and blocks everything.