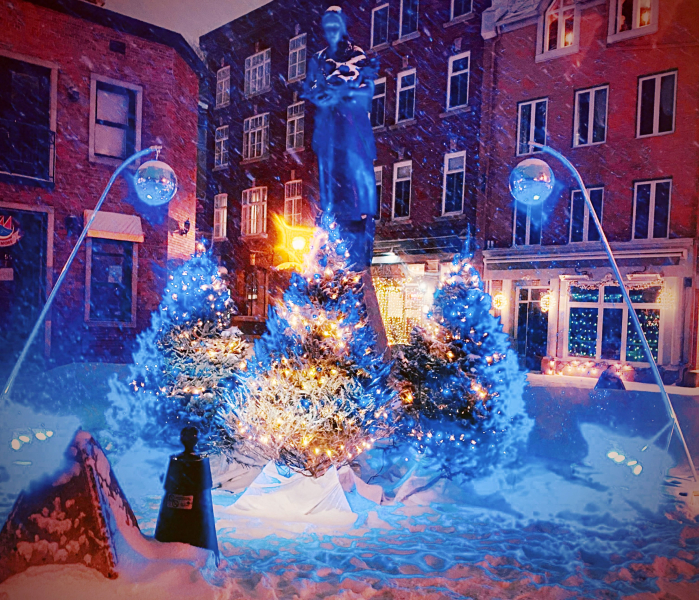 The Old Port of Quebec is a place full of history. The walking tour L'Heure Bleue allows you to discover five places in the oldest neighborhood in North America.

These audio clips, lasting four to five minutes, can be accessed by scanning the QR code available at each of these stations with your smart phone.

The course, offered until March, unfolds on the rue Saint-Paul and rue Dalhousie, between place de Bordeaux and the Musée de la Civilisation.

“We learn, here and there, lots of little things and little winks. It is unpretentious and modest,” the historian said in an interview.

Banks and financial institutions were, at the time, present on rue Saint-Pierre. On Saint-Paul, we found the big importers.

“The sector, after the Second World War, became a poor and disreputable district with crime, prostitution and sailors on the party. The sector then metamorphosed in the early 80s with the transformation of housing into luxury condos at $250,000,” noted Denis Angers.

The Old Port Business People's Association had, for eight weeks, in December 2020, presented a first version of the L'Heure Bleue course.

“The association wanted to do something to give people some hope during the pandemic. It had worked well. The content has not changed, but the technology used with QR codes and lighting is new,” he mentioned.

Place FAO, located at the corner of Saint-Paul, Saint-Pierre and Sault-au-Matelot streets, is one of the historian's favorite stations.

“Here we find the statue of La Vivrière, which is absolutely magnificent. It is the bow of a boat on which there is a woman who brings fruits and vegetables. This statue, erected in 1995, marked the 50th anniversary of the Food and Agriculture Organization, created in Quebec in October 1945 by the United Nations. Quebec, at the time, was considered the capital of the free world and 46 countries came there to create the FAO,” explained the historian.

The Hôtel Germain was set up in the building Dominion Fruit, the first skyscraper in Quebec in 1913, where fruits and vegetables arrived in the Old Capital.

L'Heure Bleue is an illuminated route that is best discovered with the onset of darkness. You can get additional information and listen to the capsules on rdvvieuxport.com.