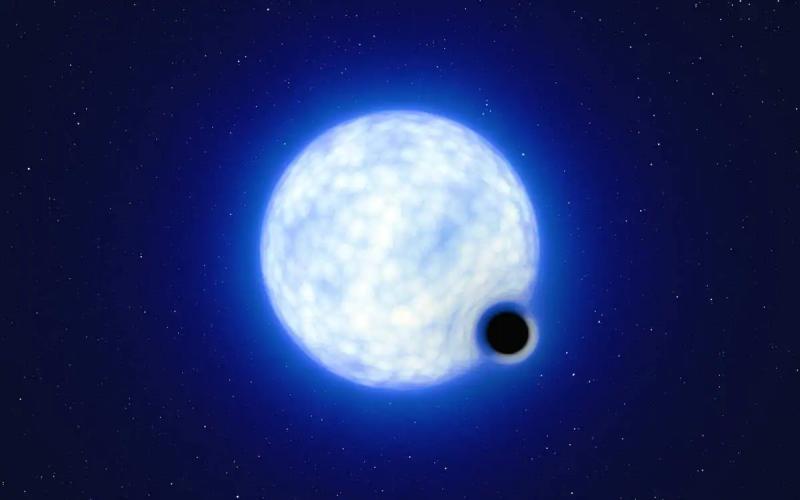 The bestiary of black holes grows with the first detection of a dormant stellar-mass black hole orbiting another star, still far enough away not to swallow its companion.

This new type of black hole, long predicted by theory, but very difficult to detect as it is well hidden, was revealed after six years of observation with the Very Large Telescope (VLT) of the European Southern Observatory (ESO) in Chile, according to a study published Monday in Nature Astronomy.

“We found a needle in a haystack,” said lead author Tomer Shenar in a statement. For three years, several candidates for the title of “dormant black hole” had presented themselves, but none had so far been accepted by this international team of astronomers, baptized by the ESO “police of the black holes”. /p>

The lucky winner, a dozen times the mass of the Sun, is lurking in the Magellanic Cloud, a dwarf galaxy near the Milky Way. It is like the second leg of a binary system of two stars revolving around each other, one of which, dead, has become a black hole and the other is still alive.

Stellar-mass black holes – incomparably smaller than their supermassive big brothers – are massive stars (between 5 and 50 times the mass of the Sun) at the end of their lives, which are collapsing in on themselves.

< p>These objects are so dense and their force of gravity so powerful that not even light can escape: they are therefore by definition invisible. Scientists can nevertheless observe the matter circulating around it, before being swallowed into it…. except when the black hole is “sleeping”, on a diet.

In the binary systems already observed, the star that has become a black hole is close enough to its companion star to “steal” its matter from it (we speak of “accretion”), Hugues Sana from the University of Louvain explains to AFP. (KU Leuven), Belgium, one of the authors of the study.

This material, once caught, emits X-rays, which can be detected. But here, the black hole emits none, and for good reason: “The living star (about 25 times the mass of the Sun) is far enough away not to be eaten. For the moment, it remains in equilibrium in this orbit”, lasting 14 days, continues the astronomer.

An equilibrium which cannot last, according to him. “The living star will grow, and at this time, part of its surface will be swallowed up by the black hole”, which will then emit X-rays and therefore come out of its dormant state.

But how do you know that such an object exists? “Imagine a couple of dancers holding hands, which you observe in the dark. One has a black suit, the other a bright suit: you only see the dance of the second, yet you know he has a dance partner, thanks to the study of movement”, explains Hugues Sana.< /p>

In astronomy, in the same way that Jupiter and the Sun revolve around each other, we can measure the respective masses of a binary system by observing these movements.

To be sure that the phantom object was indeed a black hole, the researchers proceeded by elimination, ruling out several scenarios such as that of a star losing its envelope.

“The only explanation reasonable is that it is a black hole, because no other star can reproduce these observational data”, summarizes the researcher.

According to recent models, approximately 2% of stars masses of our galaxy are likely to have a black hole around, or about 100 million, according to Hugues Sana. “For now, we only know about ten of them, all detected thanks to their X-ray emissions, so we are missing some!”