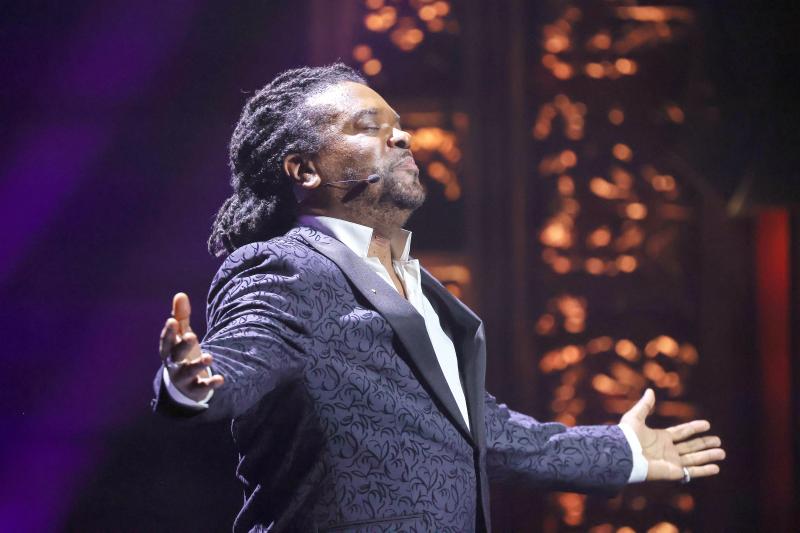 After an evening masterfully led by Michel Courtemanche, who was back on stage, Anthony Kavanagh had a not easy mandate at the helm of the second Gala du ComediHa! Fest.

An evening that got off to a slow start and got better with the numbers offered by the various guests.

Kavanagh launched the Gala, presented at the Capitole de Québec, with a number where he promised the best.

“You deserve the best”, he launched before Nordiques player Alain Côté arrives, accompanied by mascot Badaboum, with the Stanley Cup. A rare time when there was no reference to his famous disallowed goal.

Anne Roumanoff, who had offered a number that had not hit the target the day before, was back with a segment at the height of what we had seen during his show Everything is almost fine.

The French Anne Roumanoff was among the guests of the gala.

His number on women looking for love after getting divorced at 50 was solid and well put together.

“I am told that I am younger and more beautiful. They ask me the secret. It’s because I got divorced,” she said.

She offered a good segment on a point system, during a first meeting in a bar, where the presence of young children takes away points and where a deceased mother-in-law gives a lot.

From Back on stage the day after the Gala he hosted, Michel Courtemanche was in his element during a number entitled Loss of memory.

Goved upon his arrival on stage, Courtemanche moved, made noises, sounds and onomatopoeia.

Simulating what could seem to be a loss of memory, the comedian experienced a few blanks, with a few giggles, where it was difficult to perceive whether the thing was planned or not.

A destabilizing moment which made him say that maybe people were to think he had started doing drugs again. Arranged with the views guy or not, the number was just a little too long.

Did Courtemanche fool the audience? He is capable of it and it is quite possible.

After a checkered start, Mibenson Sylvain, a comedian with Haitian origins from Terrebonne, “scored” when he had fun comparing practicing Catholics to atheists.

“If you are atheist, the problems of life are yours. Atheists have to pay for a psychologist, it's free for me,” said the man who made his first appearance at a ComediHa Fest Gala!

He got some good lines out when he said that the faith of an atheist with a serious illness rested in the Quebec healthcare system.

“He has a better chance of seeing God than a doctor,” he said, provoking a good burst of laughter.

While the curtain was down and the next issue was being prepared, Anthony Kavanagh offered a very successful version of Are You Gonna Go My Way by Lenny Kravitz, where he is even went singing in the crowd.

Pierre Brassard brought Pierre Bruneau out of retirement to personify, with “rigor, rigor, rigor”, the newsreader, in an issue where Sylvie Moreau and Ghyslain Dufresne multiplied the costume changes to tell the story of humor . From prehistory, through the Renaissance, the Middle Ages and up to contemporary times.

We were a little scared when Alain Choquette launched into a card act, but the spectators were treated to a mystifying moment.

The magician and illusionist asked people call relatives to ask them to choose between black and white (black), between spades and clubs (clubs) and a number between 1 and 13 (6), and then pull out an upturned card, in a packet and that was the 6 of black clubs.

He then caused a whirlwind of paper with a fan and a piece of paper, because we need magic in our lives.

Well, it's not humor, but Choquette made people laugh by improvising with the people interviewed and magic, well done, is always something to win.

Speaking of improvisation, Michel Barrette, invited for a segment highlighting the career of a comedian, brilliantly took up the challenge of improvising on words written on a gambling roulette.

He hit the mark with his storytelling skills, talking about his allergy to wine, vacuum cleaners, pizza and the time he nearly knocked Elton John offstage in Las Vegas.

►The next Gala ComediHa! Fest will be presented Tuesday at the Capitole de Québec with Marie-Mai hosting. The guests will be Michel Charette, P-A Méthot and Christian-Marc Gendron.