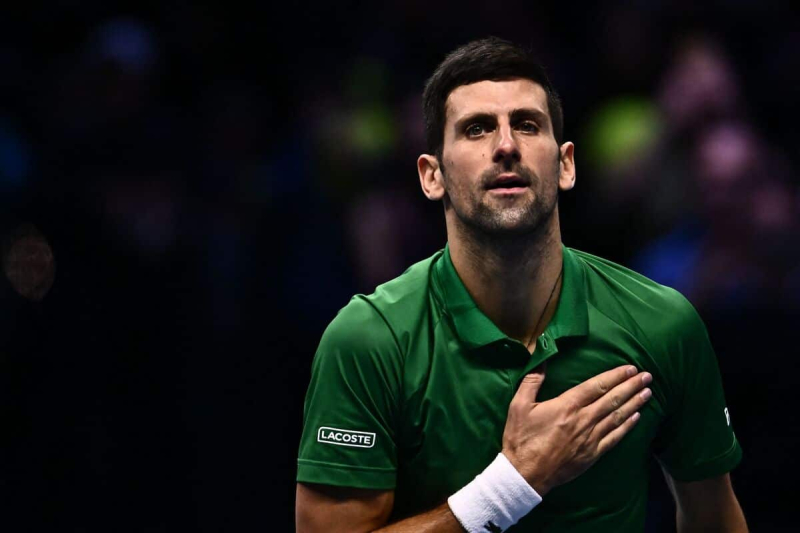 TURIN | Novak Djokovic could once again leave his mark on the history of tennis if he were to win the title at the ATP Finals, which will conclude on Sunday in Turin.

With a sixth coronation – in eight finals – the Serb would equal the mark of the illustrious Roger Federer.

Saturday, even if, by his own admission, he was not at his best after his battle of more than 3 hours against Daniil Medvedev, the day before, the former world number 1 defeated Taylor Fritz in two sets of 7-6 (5) and 7-6 (6).

Two rounds during which the players each time exchanged breaks in service. Two sets during which Djokovic also used his immense experience to prevail at the expense of a player who was in his first participation in the end-of-season championship.

“I like the fact that I was able to win against Medvedev after a long fight, then come back the next day, without having had too much time to recover, and beat Fritz in two tight sets”, rejoiced the winner.

Happy to still be there

In the first tiebreaker, “Djoko” got his first set point on Fritz’s powerful serve. A huge forehand winner from the Serbian completely thwarted the American.

The seventh seed in Italy retired to the locker room between the two sets. When he returned to the court, the momentum had changed sides. Fritz broke it right off the bat.

And the American seemed well in control of this set, dictating the game from the back of the field as he had faced Félix Auger-Aliassime in this match without a future disputed Thursday.

But Fritz, qualified for this tournament under Carlos Alcaraz's forfeit, trembled at the worst moment. At 5-4, it was 30-30 on his serve when a fan seated in the stands shouted at full point. The 25-year-old then screwed up a backhand and gave Djokovic a break point.

With nearly two decades of experience on the circuit, the “Djoker” was not going to let such a great opportunity slip away. To the sound of “Nole! Nole!” which echoed in the Pala Alpitour, he recovered at 5-5, then won the match after a hard-fought tiebreaker.

“I was hoping to find myself [again in the final ], admitted Djokovic, who had not reached this stage of the tournament for four years. I'm really happy to have the chance to fight for another trophy, one of the most important that exists in our sport.”

There's Novak… and the others

This final in Turin is the icing on the cake for Djokovic, who has only played 12 tournaments this season. Unvaccinated against COVID-19, he missed several Masters series tournaments, including Indian Wells, Miami, Montreal and Cincinnati, as well as the Australian Open and the US Open.

Despite everything, the 35-year-old player is currently eighth in the world and he still has his chances of dislodging Félix, who for the moment virtually fifth.

“When Novak plays, he's the best,” Fritz conceded after the game. There is no doubt about it. When he's not there, which has happened a lot this year, you see a lot of different results.”

“All the other players show an extremely similar level and the victory goes to whoever plays the best that week, depending on the conditions on the ground,” continued the eighth seed.

“Remember where I come from”

And this week, Djokovic is there, dominating as Fritz noted. Since he remained undefeated during the group stage, the Serb will touch 6.4 million Canadian dollars if he wins Sunday, against Casper Ruud or Andrey Rublev.

If he had lost a match in the red group, he should have “satisfied himself” with a nest egg of $2.95 million, in the event of a victory in the final.

Thanks in particular to his 21 Grand Slam trophies and his 69 other titles on the circuit, “Djoko” has already pocketed more than $214 million since the start of his career.

Asked if money was a source of motivation for him, the most dominant player of the last decade launched into a long explanation, recalling that he grew up during the war in Yugoslavia in the mid-1990s .

“I don't take anything for granted,” Djokovic said. I know what it's like to live growing up in a family of five, having nothing on the table, because of war, restrictions.”

“I experienced the opposite [of wealth], he continued. It helps me in life, because I appreciate more everything that happens to me.”

But, he insisted on recalling, “every euro [or dollars] that I have won , it was thanks to a lot of work, sweat and tears”.

Djokovic finds that his “physical constitution is quite good”

Often sympathetic and talkative at a press conference, Novak Djokovic kindly made fun of a German journalist who asked him on Saturday how his “physical constitution” was going after his long match against Daniil Medvedev.

“My physical constitution is pretty good, I think!” said the Serbian with a smile after the match against Taylor Fritz.

“But my physical condition was obviously different than in most of the games I played here, when I felt a little fresher, he continued. [Saturday], because of my 3:00 game against Medvedev, I felt a little heavier on my legs.”

“Djoko” believes, however, that he could have played a third set without struggling too much, if it had been necessary.

Tsitsipas: a smash towards his parents

< p>Debined at a press conference on Friday, Stefanos Tsitsipas made the tennis world react by saying that Andrey Rublev, the player who had just beaten him in a match without a future, had “few tools” in his game.< /p>

And that it was he, the Greek, who had been the best of this meeting.

But a few minutes earlier, on the court, the second favorite already seemed to lose control of means, annoyed by his parents, Apostolos – his father and trainer – and his mother, Julia – a former professional – who talked to him too much from their box.

The best way Tsitstipas found to silence them was to… smash a bullet in their direction.