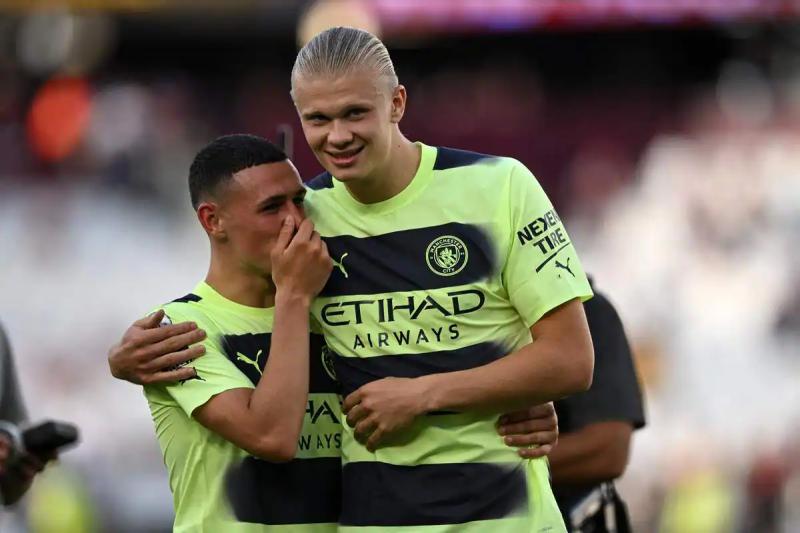 Norwegian centre-forward Erling Haaland made a successful Premier League debut with a brace as Manchester City won 2-0 at West Ham on Sunday as Manchester United of Ten Hag fell from the start against Brighton 2-1.

The defending champion City, author of a rather dull performance (two shots on target, two goals) at the London Stadium, can already thank his star recruit. “He's been good. I can't teach him how to score goals and he just needs to be comfortable,” reacted his coach Pep Guardiola.

The 22-year-old Norwegian center forward, whose every move was the center of attention for London defenders, netted his first Premier League brace in just over an hour. Two centre-forward goals, as City forwards scored too few since the end of the Sergio Agüero era.

“We know we have a threat with him. He takes depth incredibly and he's an incredible finisher,” Guardiola continued. “He adapts perfectly to the way we want to play. We will find him more and more and give him the opportunity to score more goals.”

Erling Haaland first made the difference by provoking a penalty which he converted himself ( 36th). Goalkeeper Alphonse Areola, who entered six minutes earlier due to an injury to Fabianski, had thrown the striker off balance, failing to intercept the ball.

Haaland then scored the second goal on a counter-attack and a deep pass from Kevin de Bruyne (65th, 2-0). Something to make his father, Alfie Haaland, former Manchester City player, smile in the stands.

Erik Ten Hag, he has nothing to smile about yet. For the Dutch technician's first game on the Manchester United bench in the league, the Red Devils logically lost (2-1) at Old Trafford against an efficient Brighton and while Cristiano Ronaldo started the game as a substitute.

The difference was made in the first half, with two goals from Pascal Gross (30th and 39th).

Even after reducing the score with an own goal from Alexis Mac Allister (68th), ManU never seemed able to really raise their level of play. And Ten Hag recognized that there was “a lot of work” to do after this first defeat.

The debut of Lisandro Martinez as central defender, alongside Harry Maguire, did not stabilize the defense. This one even almost provoked a penalty which could have allowed the Seagulls to score a third goal.

A week after the controversy caused by the departure of several players, including Ronaldo, before the end of a friendly match against Rayo Vallecano, the Dutch coach must remobilize his group as quickly as possible, and clarify the situation of his Portuguese center forward, who wants to leave at all costs to play in the Champions League.

After the meeting, Ten Hag made it clear that he was still counting on the fivefold Ballon d'Or, despite his 37 years: “If it had been possible, I would have played him. Cristiano only has ten days of training with the team. It's too short for 90 minutes”, he explained to justify his absence from the starting lineup. “It is clear that we were better in the middle with Ronaldo in front of Eriksen”, he also assured, while the Portuguese came on in the second half.