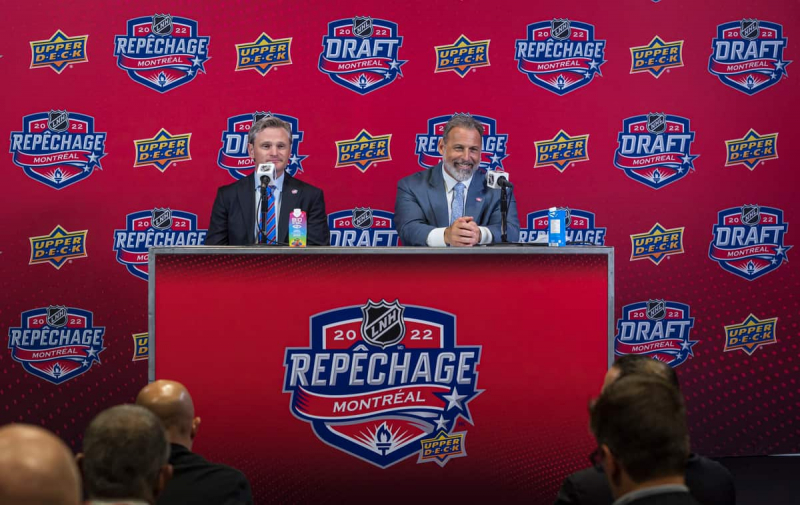 MONTREAL | There's a two-headed monster to steer the Canadiens' big ship with Jeff Gorton and Kent Hughes. The duplication phenomenon is also transposed with the repechage where there are two gurus with Martin Lapointe and Nick Bobrov.

Since the dismissals of Marc Bergevin and Trevor Timmins, the reconstruction is not only apparent on the ice, but also in the upper echelons of the organization.

“When you come out of a draft, you're always happy,” Bobrov said. But we will hope that we will be in five years. »

“We are satisfied, very satisfied, added Lapointe. We accomplished things that were not always easy. We see a lot of matches, recruiters work a lot. We made the best decisions for CH. We had several choices and sometimes we had to make quick decisions. »

Bobrov recycled a good old cliché of Timmins saying he was happy with his draft while recalling that he would have a better idea of ​​​​this vintage in the future.

In the first round, the Habs had drawn twice in the court of Slovakia with Juraj Slafkovsky as first in class and Filip Mesar in 26th place. For this second day, Lapointe and Bobrov added nine other hopefuls.

With two other choices in the second round, the Canadian bet on a center in Owen Beck and a small mobile defender in Lane Hutson. According to several recruiters, Beck and Hutson had the potential to know their fate in the first round. But they will have slipped to the delight of Montreal hockey men.

Bobrov attempted to identify a common ingredient for the team's eleven picks. It was a very difficult aspect to quantify, to play the right way.

“It was my first draft with the Canadiens, but I have enough experience in this trade, said Mentioned the Russian who also speaks English and French. We were looking for players who play the right way. You win the Stanley Cup by playing the right way. »

“We wanted to find players who realize what it means to play the right way. You always look for the skate, the sense of the game and the talent. But we must not forget that Montreal is a different market. You need to be resilient, very resilient. It was a barometer. You stay even more alert. You need strong young people to survive in Montreal. And you need to play the right way to win in the NHL.

Hughes hadn't deliberately hidden his game for his first choice with Slafkovsky.

“We were still deliberating on Wednesday morning,” Bobrov said. It was not an easy decision. There were good players for the summit. The debate continued. It was what Juraj was able to do that ended up making the difference. At his age, it's pretty special. For the draft, it is not to know who will be ready to play now or tomorrow, but to find the best player in several years. We believe Juraj is that person. »