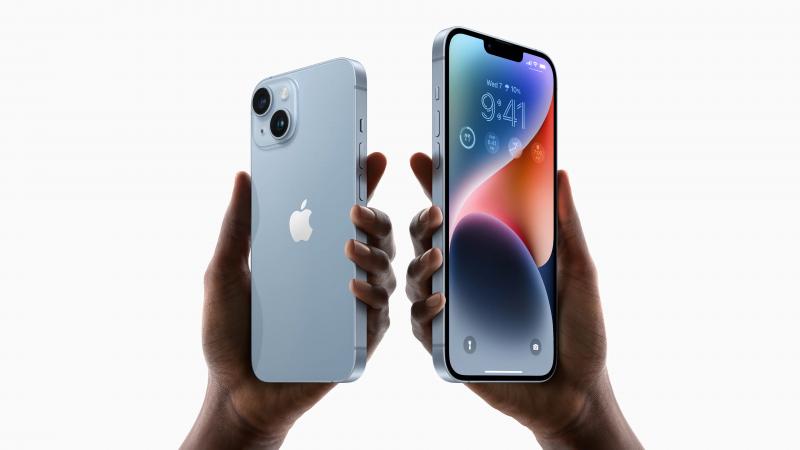 The new iPhone 14s are available in 6.1-inch and 6.7-inch (14 Plus version) and assembled in an aerospace-grade aluminum chassis, available in five finishes. According to Apple, the iPhone 14 Plus has the best battery life ever offered by an iPhone. Both models feature an updated internal design for better thermal performance, Super Retina XDR displays with OLED technology supporting 1200 nits of peak HDR brightness, 2,000,000:1 contrast ratio and Dolby Vision. /p>

iPhone 14 and iPhone 14 Plus feature Ceramic Shield displays – exclusive to iPhone and tougher than any other smartphone glass – and are protected from common spills and accidents thanks to their resistance to water and dust.

The famous notch at the top of the screen of the 14 Pro models undergoes a transformation to better adapt to notifications that can sometimes disturb.

The new notch on the 14 Pro version

The new main camera delivers 12MP resolution thanks to a larger sensor, a new TrueDepth front-facing camera, an Ultra Wide ultra-wide-angle photo sensor and the Photonic Engine for a giant leap in low-light performance.

Dual camera system on 14 and 14 Plus versions

Speaking of imaging hardware and software, the Photonic Engine feature improves low- and medium-light performance for photos from all cameras: up to 2x on the Ultra Wide camera, 2x on the TrueDepth camera, and an impressive 2.5 times on the new main camera.

This TrueDepth front camera provides an ƒ/1.9 aperture that allows for better low-light performance for stills and video. Using autofocus for the first time, it can focus even faster in low light and capture group shots from further away.

A new Action mode for incredibly smooth video that adapts to strong shakes, movements and vibrations, even when video is captured in the middle of the action.

The Ultra Wide Camera, offering a unique perspective for wider shots and enhancements to low-light shots with Photonic Engine.

Here is a security feature that may appeal to many people. The entire iPhone 14 lineup introduces emergency crash assistance capabilities.

With a new dual-core accelerometer capable of detecting G-force measurements of up to At 256G and a new gyroscope, Crash Detection on iPhone is now able to detect a serious car crash and automatically call emergency services when a user is unconscious or unable to reach their iPhone.&nbsp ;

These capabilities build on existing components, such as the barometer, which can now detect changes in cabin pressure, the GPS, which provides additional data for gear changes, and the microphone, which can recognize noises strong characteristics of serious car accidents.

When combined with the Apple Watch, the Crash Detection feature seamlessly leverages the unique strength of both devices to provide assistance to users efficiently. When a serious accident is detected, the interface for calling emergency services appears on the Apple Watch, since it is more likely to be near the user, while the call is made through the 'iPhone if it's within range for the best possible connection.

The iPhone 14 range also introduces the Emergency SOS via satellite feature, which combines custom components deeply integrated with software to allow antennas to connect directly to a satellite, allowing messages to be sent to emergency services outside. cellular or Wi-Fi coverage.

As you know, satellites revolve around the Earth at several thousand kilometers per hour, so it sometimes takes several minutes for the messages to be transmitted. Because every second counts, with Emergency SOS via satellite, the iPhone asks a few essential questions in the foreground to assess the user's situation, and tells them where to point their phone to connect to a satellite.

< p>The initial questionnaire and follow-up messages are then relayed to centers staffed by Apple-trained specialists who can call for help on the user's behalf. This breakthrough technology also allows users to manually share their satellite location with the Find My app when there is no cellular or Wi-Fi connection, providing a sense of security when hiking or camping off the grid. . Emergency SOS via satellite will be available to users in the United States and Canada in November and the service will be free for two years.

The A15 Bionic graphics chip features 5 cores to deliver even smoother graphics for high-performance video applications and games, according to Apple. Frugal, it gives impressive battery life and protects privacy and security with Secure Enclave. The 6-core main chip handles demanding tasks smoothly and efficiently, and the 16-core Neural Engine is capable of performing 15.8 billion operations per second, enabling even faster machine learning calculations for iOS 16 features and third-party app experiences.

eSIM chip instead of SIM card

The eSIM allows users to easily connect or quickly transfer their existing plans digitally, provides a more secure alternative to the physical SIM card, and allows for multiple cellular plans on one device. iPhone 14 and iPhone 14 Plus therefore remove the traditional SIM slot for US models, allowing users to set up their devices faster and easier.

iPhone 14 and iPhone 14 Plus will be available in midnight, blue, starlight, purple and (PRODUCT)RED colors in storage capacities of 128GB, 256GB and 512GB.

The Emergency SOS service via satellite will be available from November in the United States and Canada, and the service will be included free of charge for two years with the iPhone 14 and iPhone 14 Plus activation.

In closing, the new iOS 16 system will be available as a free software update this Monday, September 12.