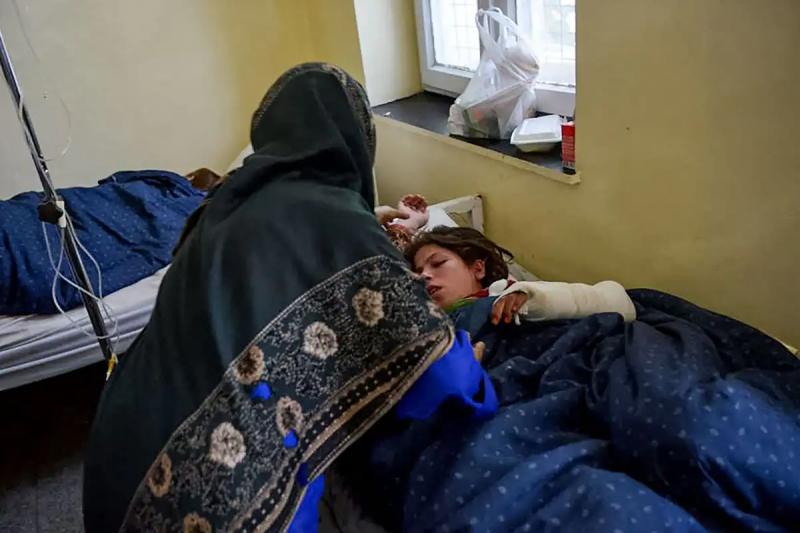 “Now I am alone, I no longer have anyone”. On her hospital bed in Sharan, Bibi Hawa's face was distorted by tears. At least a dozen of his family members died in the earthquake that struck southeastern Afghanistan on Wednesday.

“Where will I go, where will I I go? My heart is weak,” repeats Bibi Hawa, 55, in tears. She lived in the district of Gayan, one of the most affected by the earthquake.

A nurse tries to calm her down, talking to her and stroking her forehead gently with her hand.

In the room, like her, a dozen women are lying on a bed. Most are sleeping, buried under a blanket, some with an IV hooked up to their arm.

Shahmira is seated. She is uninjured and holds her one-year-old grandson lying in front of her. He has a large bandage on one temple.

On the bed next door, his daughter-in-law is sleeping. Her son, also injured, is being treated in a hospital ward.

“We were sleeping when we heard a loud noise. I screamed, I thought that my family was buried under the rubble and that I was the only one” to have survived, she says, a large colorful shawl on her head.

“We thought that this child (his grandson) was dead (…) But suddenly he cried. We sprinkled water on his face and he began to breathe,” she adds.

In an adjoining room, a dozen men are also stretched out on their beds.< /p>

A father holds his son on his lap. The child is wearing mustard pants with small black hearts. The bottom of his left leg is in a cast.

A boy is lying under a blue blanket. His left arm is in a cast. His khaki shirt is still dusty. On his forehead was stuck a white bandage with the word “emergency” written in black marker.

His eyes are red with fatigue and tears.

In another room, Arup Khan, 22, came to accompany his injured cousin to the hospital. Two members of his family perished.

“When I got up, I was covered in dust. People came and took us out. The situation was horrible (…) There were screams everywhere, the children and my whole family were under the mud,” he said.

“It's so sad,” says Mohammad Yahya Wiar, the director of Sharan hospital.

He was alerted around 3am and immediately sent teams to the scene. They arrived only around 9 a.m., as the affected areas are so difficult to access.

When the wounded arrived, they “were crying, and we cried too”, he says.

The most seriously affected people were referred to hospitals in the cities of Garde and Ghazni, which are equipped with operating theatres.

“Our country is poor and lacks resources. It is a humanitarian crisis. It's like a tsunami. We cannot describe how it is, but it is really a difficult situation”, concludes the doctor.

In front of the hospital, a hundred men are waiting. “They came to donate blood. About 300 have already given it since this morning,” says a Taliban.