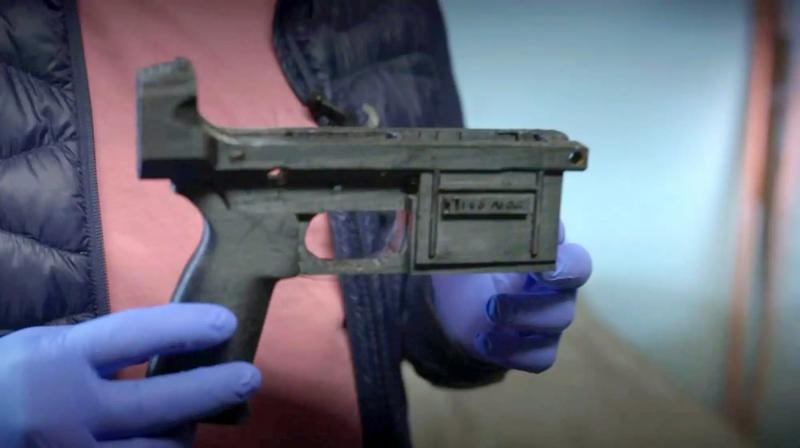 Creating deadly firearms for street gangs with a 3D printer is child's play, reveals a manufacturer who spoke to our Bureau of Investigation.

It was directly from a soundproof cellar located under his house that Martin (assumed name) received us in order to confide in the clandestine manufacture of ghost gun, as they are called in the industry.

Here we see the 3D printer used by the weapons manufacturer who confided in us.

“I wanted to demonstrate that access to firearms is not only related to (native) reservations and trafficking from the United States,” he says.

With his 3D printer, Martin himself created dozens of pistols for his simple curiosity.

“It's easy to make them yourself,” he adds, showing off the lower part needed to build a weapon similar to the AR-15, the semi-automatic rifle recently banned in Canada and which was used during a massacre in a Texas school last May.

According to him, all you need is a 3D printer to create the lower and upper parts in polymer.

Then, the person will only have to order the interior hardware of the weapon on the web, delivered by post in complete legality, to assemble it with a little resourcefulness.

“You will have a functional weapon, then it is reliable,” says Martin, who believes that if he can do it, anyone can do it.

André Gélinas, former shooting instructor and ex-detective sergeant at the SPVM, specifies that it is not as simple as that for ordinary mortals.

Once assembled, the semi-automatic weapon can do heavy damage very quickly .

“Creating the frame of the weapon requires good equipment, and as a rule, the criminal world does not give itself that trouble. He buys the weapon already assembled,” he says.

Moreover, last January, our Bureau of Investigation revealed that at least two shipments of already assembled weapons entered the Quebec, especially via the Akwesasne reserve.

As for the unit price of some of the parts to order on the web to make a 9 mm pistol, André Gélinas gives an overview:

When assembled, the ghost gun would sell for between $1,500 and $2,500 on the black market, according to an arms dealer who confided in us.

Since the creation last October of Operation Centaure to fight against violence linked to firearms, seven 3D printers have been seized, according to our information.

But in the eyes of André Gélinas, the seizures only represent the tip of the iceberg.

In Europe, 3D printed weapons are of concern to the European Office of Police (EUROPOL), which has been observing for several years “an increasing number of these weapons seized in surveys across Europe,” according to Capital magazine and Agence France Presse.