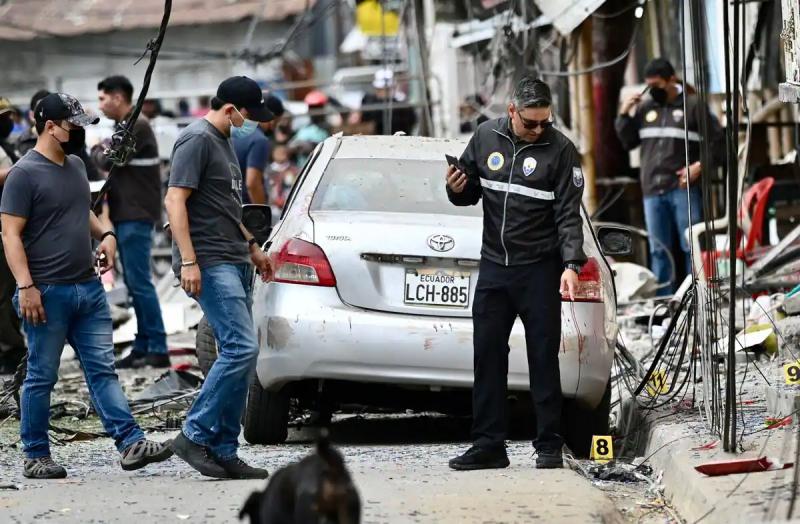 Five people died and 20 were injured on Sunday in an attack in Guayaquil (Ecuador), which the Ecuadorian government attributed to organized crime.

« Organized crime mercenaries (…) are attacking us today with explosives. (…) It is a declaration of war against the state”, tweeted the Minister of the Interior, Patricio Carrillo.

Three people died at the site of the explosion and the other two in the city hospital, the commander of the area to which Guayaquil (southwest), General Victor Zarate, told the press. p>

He added that twenty people were injured in the explosion which took place in the middle of the night, at 0300 (0800 GMT), and are receiving treatment in several clinics, while the emergency services (SNGR) initially reported 16 injuries.

Shortly before the explosion, two unknown persons on a motorbike had arrived on the scene and had deposited near a restaurant “a bag” containing in all likelihood “a powerful explosive device”, explained General Zarate, reporting the first elements of investigation.

The explosion also caused the destruction of eight houses, completely ripped open by the blast of the explosion, two cars and a motorcycle, according to the SNGR.

“Either we are able to unite to confront (organized crime), or the price to pay will be even higher for society”, warned Mr. Carrillo, announcing a reward of 10,000 dollars (9,750 euros) for any person who would provide information on this attack.

A once pacified neighbor of Colombia and Peru, the world's two largest producers of cocaine, Ecuador is today a center for shipping white powder to Europe and the United States and a place of territorial dispute between multiple gangs, according to authorities and analysts.

Mexican cartels, intent on managing all business activity, from production to shipping, have found in Ecuador a dollarized economy where they can launder their illicit earnings and authorities unprepared to deal with gangs and quickly. overwhelmed by the economy of corruption.

The country, which for years was only a place of transit, has become a “sanctuary for organized crime”, recently told the AFP Mario Pazmiño, former head of military intelligence.

According to a recent report by the United Nations Office on Drugs and Crime (UNODC), Ecuador, with a population of 18 million, is the third country in the world with the largest drug seizures in 2020. cocaine, after Colombia and the United States, or 6.5% of the 1,424 tons seized worldwide.

Between 2021 and today, more than 300 tons of cocaine have been confiscated, a Interior Minister Patricio Carrillo said. But the seizures, which reached an annual record of 210 tonnes in 2021, represent less than 30% of what actually circulates in ports and airports.

This juicy traffic leads to many covetousness and violent regulations accounts that the authorities are struggling to control.

The homicide rate has increased from 6 to 14 per 100,000 inhabitants between 2018 and today, according to statistics from the Ministry of the Interior.

Clashes between gangs have also spread to prisons and have killed more than 350 inmates since February 2021.