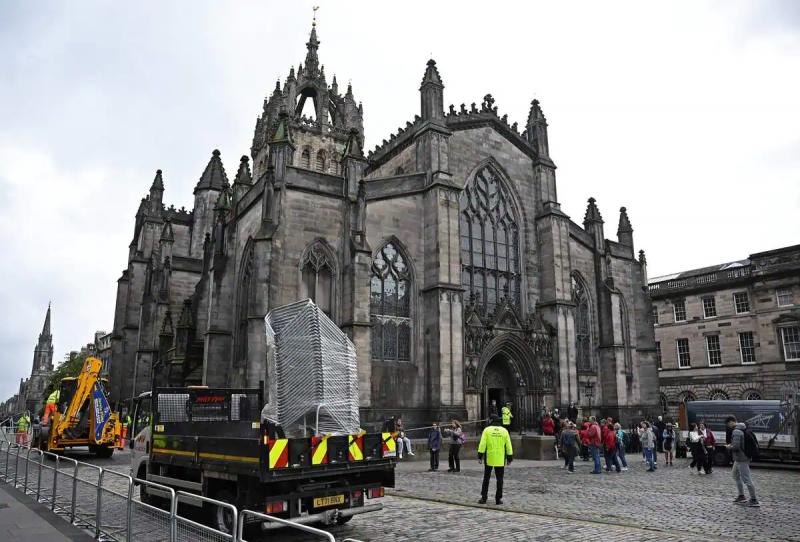 Sadness, drizzle, and, in the background, a strange form of effervescence. Edinburgh mourns Queen Elizabeth II and prepares to receive the coffin of the monarch who passed away on Thursday at her Scottish castle of Balmoral.

Against a damp wall of Holyroodhouse, the official palace of the monarchy in the Scottish capital, the flowers, which began to be laid as soon as the day before are more and more numerous.

Gary Millar, 45-year-old technician, leaves a bouquet and meditates in silence. From early morning, he came to show his “respect” for the queen, “to honor her”.

“She honored us throughout her reign by fulfilling her duty,” he underlines, his voice tight with emotion. It's time for the public to “give her back some of what she has given to the country as a mark of respect”.

In Scotland, under an independentist government, the Queen is much more popular than the monarchy itself. But for Gary Millar, the sovereign “held the country together”, she was “the figurehead of the union of our Great Britain”.

“She's been there all my life,” he continues, noting the monarch's “hard work” and “dedication.”

The “right monarch for the times”

It is at Holyroodhouse that the Queen's coffin is expected in the coming days. The remains will then be carried in a procession through the Royal Mile, the main artery of the Scottish capital, to Saint-Gilles Cathedral where a religious service will be held in the presence of the royal family and the public will be able to meditate.

The coffin will then be transported, a priori by plane, to London.

At the foot of the wall, gardeners arrange the lawn on a background sound of mowers and brushcutters, in a damp smell mixing gasoline and cut grass .

Moved to tears, Rebecca Evans, 44, is simply 'sad', although the Queen's passing is not 'unexpected' .

“She welcomed the new Prime Minister” Liz Truss on Tuesday and seemed “to be fine” and “on Thursday she is leaving us, it is very very sad”, she sobbed.

“There's so much going on in the UK right now,” the blonde woman in a fuchsia sweatshirt continues, listing Brexit, “this government,” the “energy crisis,” “recession “. The Queen's death represents “such sadness”.

The Scots are “notoriously grumpy”, she notes, put “we really like the queen” and “the royal family”. Working for a think tank devoted to global warming, she predicts that King Charles III “will be a good monarch”, the “good monarch for this time”.

“It has been ridiculed, but it is time to act” for the climate and the environment, she believes, stressing that the new sovereign and his son William “support this”.

The fact that the Queen's coffin is initially buried in Scotland is, according to her, a source of local pride, while “everything is centered on London”.

“When you see the mountains in the mist, it's so beautiful, you can't imagine a better way to leave than to die peacefully in the mountains,” she adds very moved.

“Everyone works very hard,” she says, citing among other police and security guards who guide the public. Out of respect for the Queen, postal workers and railway workers called off their strikes. “It's very British, it is perhaps the most British answer”, because the Queen “has never gone on strike”, underlines Rebecca Evans.

48-year-old Irishwoman Based in Edinburgh, Orla Bell came to lay flowers, as her mother is a “great admirer of the royal family”. So much so that 25 years ago she left a bouquet for her mother when Princess Diana died.

“The queen was like a mother to the whole country”, she thinks, “I think Tony Blair called her the matriarch of the country”. But “even if you are not a fan of the royal family or are not British, I believe it is important for everyone”.