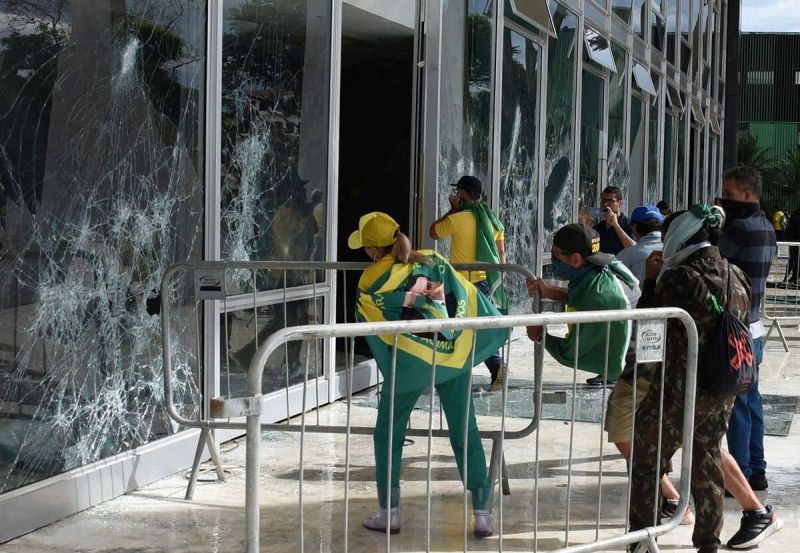 Ex-Brazilian President Jair Bolsonaro, whose relatives had already been implicated, is now himself directly targeted by justice for his role in the ransacking of national institutions in Brasilia.< /strong>

The General Prosecutor's Office asked the Supreme Court on Friday to subject the former far-right head of state to an investigation “which seeks to clarify the instigation and moral magisterium of the anti-democratic acts which have led to episodes of vandalism and of violence in Brasilia” on Sunday.

Jair Bolsonaro, narrowly beaten by left-wing candidate Luiz Inacio Lula da Silva, “carried out a public incitement to the execution of a crime” by broadcasting on the social networks a video “questioning the regularity of the presidential election of 2022”, explained the prosecution in a press release.

The video was published two days after the violent invasion of the headquarters of the presidency, Congress and the Supreme Court by thousands of Bolsonarists, then deleted, the prosecution recalled, but it could provide “a link of proof” justifying “ a global investigation into acts carried out before and after January 8, 2023” by Jair Bolsonaro.

The ex-president, who has been in the United States since the end of December, had already been pinned on Friday for lavish spending during his mandate with the presidential credit card, such as the 20,000 euros disbursed in one go in a modest restaurant in the north of Brazil or the 10,000 euros in a bakery the day after his son's wedding.

The presidential credit card account statements for his four years in office (2019-2022) have been published on an official online site of the Lula government, which has begun to lift a secrecy imposed for 100 years by its predecessor on thousands of official documents.

But the prosecutor's request for an investigation also follows a revelation already linked to the remake of the assault on the United States Capitol on January 6, 2021, and which implicates the former Minister of Justice, Anderson Torres, in whom a a draft decree was found that could have allowed the annulment of the election of Lula to the presidency.

This very compromising document revealed Thursday evening by the daily Folha de S. Paulo was found during searches by the Federal Police at the home of this former minister, who is the subject of an arrest warrant from a judge of the Supreme Court for alleged “collusion” in the bolsonarists who stormed the places of power in Brasilia on Sunday.

“We will wait for him to show up until Monday. If this is not the case, we will launch the extradition request procedure next week, ”announced Flavio Dino, Lula’s Minister of Justice, in office since January 1, on Friday.

Mr. Torres has repeatedly proclaimed his innocence and has promised to return to Brazil to surrender to the authorities, without giving a precise date.

The three-page document found at his home states that the federal government takes control of the Superior Electoral Tribunal (TSE), which oversees the smooth running of the ballot, “to ensure the preservation and restoration of transparency, and to approve the regularity of the electoral process for the presidential election of 2022”.

A measure considered unconstitutional by many jurists. In practice, this means that the intention would have been to annul the election of Lula.

The presidential decree – which never saw the light of day – provided for the creation of a “commission de electoral regulation” to replace the TSE, headed by a majority of members from the Ministry of Defense (8 out of 17).

The document is not dated, but the name of Jair Bolsonaro stands out. found at the end, on a space provided for his signature.

“While 33 million people were starving, they were preparing a coup,” tweeted leftist Senator Randolfe Rodrigues, leader of the Lula government's parliamentary bloc in the upper house, on Friday.

“It shows that what we saw on January 8 (the invasion of places of power in Brasilia) was not an isolated act. (The draft decree) is one of the links in a putschist chain,” Flavio Dino had already declared on Thursday evening.

The Federal Police told AFP that they could not comment an ongoing investigation.

Mr. Torres, who is in the United States and was already there on Sunday, said Thursday evening on Twitter that this draft was “probably in a pile of documents supposed to be destroyed in due course”, that its contents have been leaked and are judged. “out of context”.

The former minister had held the position of head of security for the Federal District of Brasilia since January 2, but went on vacation shortly afterwards.