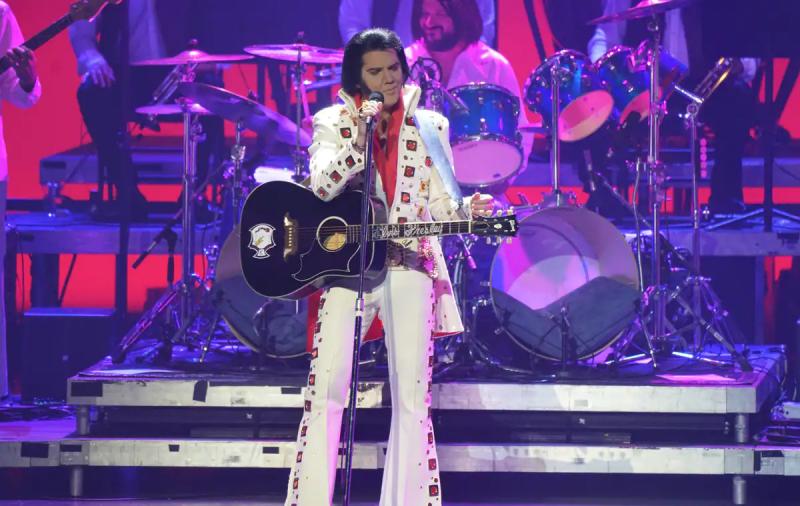 Forty-five years to the day after he passed away, the King returned from the dead on Tuesday night at Montreal's Théâtre St-Denis.

In the guise of the king of personification, Martin Fontaine, who has been bringing Elvis Presley back to life for 27 years now, the King of Rock and Roll has returned to the stage in a brand new and ultimate show, “Elvis Experience”. This latest series of shows, which is unfortunately set to end at the end of the year, pays tribute to the North American tour “Elvis On Tour”, which celebrates its 50th anniversary this year and which has never stopped at Quebec.

This new show by Martin Fontaine transports the public to the beginning 1970s, just after the King had achieved major success with his long series of shows in Las Vegas and just before his first medical troubles began.

The features of Fontaine and those of the King are to be mistaken. In the mythical white set with sequins, with accents of red and a plunging neckline, the interpreter, who also wore the cape and the favorite on Tuesday evening, was irreproachable. From his gestures to his swaying, from his voice to his accent, the simulacrum was just right, to the delight of the fans who rushed to the front of the stage to touch their idol, as the young women did at the 'era.

Sharing the stage with fifteen musicians and eight singers, who wore afros and bell bottoms, Martin Fontaine, who was 15 years older than the King when he died, addressed the crowd in English throughout the show, as Elvis Presley did, laughing very often with his audience who proved to be a good player.

The impersonator of course revisited some of the greatest classics of Elvis' repertoire, including “(Let me be your) Teddy Bear”, during which the singer threw a few teddy bears at the crowd, who did not hesitate a seconds to get up from his seat to grab one. He also sang “Love Me Tender” while walking in the front rows of St-Denis, “Proud Marry”, “Burning Love”, “Suspicious Minds”, “Jailhouse Rock” and “Can't Help Falling in Love” , which he kept for the very end of the concert.

The hall was not completely full, but it was very participative throughout the evening, applauding very loudly between the numbers , cheering on the impersonator in his Devil Dance solos, singing and waddling on the end of his seat, until rising to dance to a medley uniting “Get back”, “Little Sister” and “Blue Suede Shoes ”.

“Elvis Experience” will be presented until Saturday, at the St-Denis Theater in Montreal. The show will then go to Trois-Rivières (from August 23 to 27), Saguenay (from September 1 to 4) and Quebec (from December 7 to 31). For information: elvisexperience.com