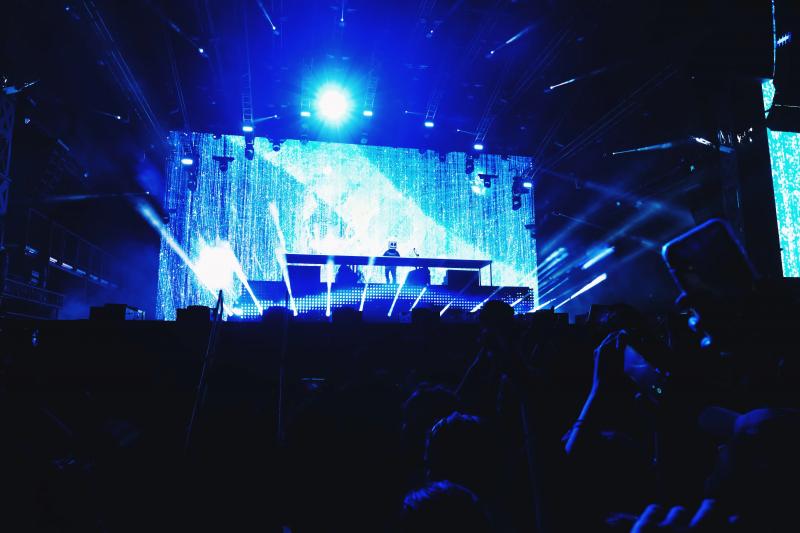 Known under the name of Millimetrik, Pascal Asselin, DJ from Quebec City, had a great time on Wednesday when he performed on the big Plaines stage, to launch the electro evening featuring featuring Marshmello.

Intense, epic and memorable are the three words that came out when he was asked, after his performance, to sum up his 35-minute time on stage.

“I had often dreamed of myself produce on the Plains telling me that it couldn't be done and that I was too small for that,” he said in a backstage interview.

Millimetrik had already bought his pass for the Festival when programming director Louis Bellavance asked him to be there.

“I didn't want to miss Rage Against the Machine,” he said, wishing now that it would be possible.

< p>Accompanied by drummer Jean-Michel Perrier and two dancers, Millimetrik offered several tracks from his album Sun-Drenched released last year. Dominic Pelletier and Liana Bureau came to sing a few titles in front of a good crowd, the biggest of her career.

“It's our home here. You have no idea how good it feels to be in your city and on thisfucking stage there,” he said at the start of his visit to the boards.< /p>

We could see a Quebec flag in front of the stage and we felt a nice “vibe” set up during L’Enfant du feu.

MIllimetrik began his performance with a lot of drums and electronic percussion. A nod to his past as a drummer. Which gave a summery entry, dynamic and with big sound.

“I had all kinds of thoughts preparing for this show. I chose to go with my color and be myself. What I do is a lighter house and with percussion. Ten or 15 years ago, when I was younger, I would have done like everyone else. I'm not saying this to brag, but I've been incorporating drum sounds into my music for ten years. I believe in it,” he said.

With the cancellation of Australian Alison Wonderland's performance due to illness, fans of “beats” were entitled to Oliver Lee and James Carter of British duo Snakehips.

We recognized Party Up (Up in Here) by DMX, September by Earth Wind and Fire and the hits Don't Leave and All My Friends.

Electro parties, to be enjoyable, must, first and foremost, consist of good “beats” and that is what Oliver Heldens proposed. He had quite a few in his mixing consoles.

The DJ from the Netherlands accompanied his single Koala with some bars of Madonna, a version of I Was Made For Loving You by Kiss and Le Freak< /em> de Chic, creating a high-octane club vibe. He set the Plains on fire. It even danced in the corporate tents and in the VIP area. That's good to say.

It's all well and good to have flames, smoke and laser beams and a whole panoply of visual effects, it's the music that counts and makes you jump and dance.

We even had right to a remixed and faster version of Another Brick in the Wall Part 2 by Pink Floyd, some bits of La Madone and A beautiful story by Fugain and his Big Bazar and Disenchanted by Mylène Farmer to put an end to her performance. What more can I say. He conquered the Plains.

“You are amazing. I love you Quebec,” he said, behind his equipment. Let's say the 27-year-old DJ from Rotterdam set the bar high for American Marshmello who was due to hit the stage at 10:15 p.m.

The sound was powerful, the low frequencies were thunderous and cut through the bodies and lighting were starting to look interesting with the presence of darkness.

And as tradition dictates, beach items were plentiful among the crowd with multicolored pool noodles, beach balls, flying sharks and… a male inflatable doll.