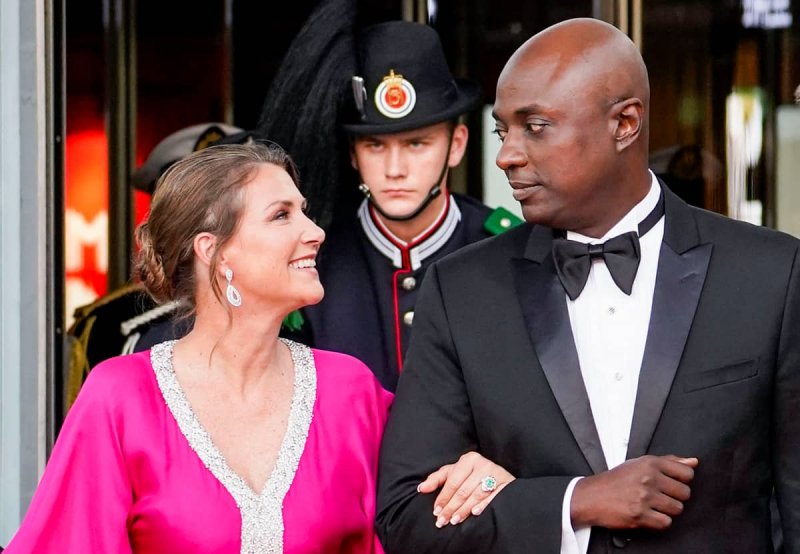 “The Princess and her fiancé Durek Verrett want a clearer distinction between their own activities and the Royal Household,” the palace said in a statement.

“This includes, among other things, that they will no longer use the title of princess and will not mention members of the royal house on their social networks, in media productions or in the context of other commercial activities”, continues the royal house, specifying however that Märtha Louise “will keep her title” of princess .

Princess Märtha Louise, with her fiancé Durek Verrett, in May 2019.

The eldest daughter of the Norwegian royal couple and fourth in the line of succession, the 51-year-old princess had decided to start a new life with a self-proclaimed spirit guide in Hollywood, Durek Verrett.

They had announced their engagement in June.

The princess is an eccentric in the Scandinavian kingdom, claiming to be able to communicate with angels, a gift she tries to share through courses and the publication of books.

Durek Verrett describes himself as a “sixth generation shaman”, counting among his followers such celebrities as Antonio Banderas and Gwyneth Paltrow.

In his book Spirit Hacking, he the latter, for example, offers exercises to erase the vaginal “imprint” of women who have had multiple sexual partners and suggests that cancer is a choice.

In the press release from the palace, Märtha Louise claims to be “ aware of the importance of research-based knowledge”.

“However, I also believe that there are components of a good life and good physical and mental health that are not so easily summarized in scientific study,” she adds.

“Spirituality, intimacy with other people and animals, yoga and meditation” may be additional factors, as can “the warmth of a hand, an acupuncture needle, a crystal” .

The Princess says she hears 'making a distinction between 'me, a private person' and as a member of the Royal Family, calling for respect for her personal vision 'without others having to answer”.

An atypical couple, Märtha Louise and her fiancé struggle to win the hearts of Norwegians. According to recent polls, more than half of them would like her to renounce her title of princess.

Divorced from a first husband who then committed suicide, the eldest daughter of King Harald V had already given up most of his titles, including that of “royal highness”.