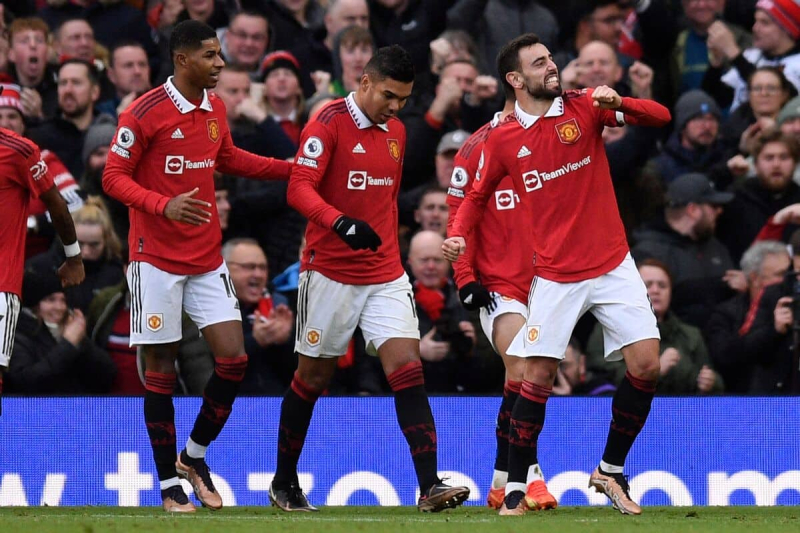 Manchester United confirmed their return to the forefront of the English championship by beating City (2-1) on Saturday during the 20th day, while Liverpool, outclassed by Brighton (3-0) , sees the top 4 move away.

Leaded, but never resigned, the Reds Devils overthrew, with a little help from the referees, City which is no longer running smoothly with a Erling Haaland clear.

United are temporarily back on the podium with 38 units, one length behind their neighbor (2nd) and six behind Arsenal, who travel to Tottenham on Sunday.

Already beaten by bottom side Southampton (2-0) in the Coupe de la Ligue on Wednesday, the Citizens were once again laborious in the first half, despite high ball possession.

Pep Guardiola's coaching seemed to work when Jack Grealish, three minutes after entering in play, opened the scoring with a header on Kevin De Bruyne's first breakthrough in the opposing box (0-1, 60th).

But United, who had two good chances against Marcus Rashford in the first half, found the resources to come back.

On an action where the referee rather generously estimated that Rashford, clearly offside, did not interfere with the action, although he did not stop his forward run, Bruno Fernandes equalized (1-1, 78th).

Galvanized, the Red Devils forced the decision by Rashford, still ahead of the last defenders, but behind the ball from the center of Alejandro Garnacho (2-1, 82nd).

For City, who will face twice Tottenham and twice Arsenal, including once in the FA Cup, in their next six matches, a quick reaction is imperative.

Overtaken in all areas of the game by increasingly attractive Brighton, Liverpool were badly beaten (3-0) and can start to worry about their chances of playing in the Champions League next year.

With 28 points in 18 days, the Reds slipped to 8th place, overtaken by their hosts of the day. They are 10 points behind Newcastle and 4th place which offers the last ticket for the C1.

More than the result, it is the way that worries because, as during the defeat at Brentford ( 3-1), Jürgen Klopp's men hardly existed.

They fell to Seagulls who, since the restart, apart from a dramatic 4-2 loss to leaders Arsenal, have won four games 15-3 on aggregate.

After a first half ended on a flattering 0-0 for Liverpool, his rearguard, deprived of Virgil van Dijk, injured, yielded on a double from Solly March (48th, 53rd) and a last goal from Danny Wellbeck (81st).

The next day, in a week, against Chelsea, will already look like a double or nothing between the two biggest disappointments of the season.

The other matches of the afternoon were rather at the bottom of the table and could have an important weight in the fight for maintenance.

After having offered City in the middle of the week, Southampton chained a third success in a row, in all competitions, by going to win 2-1 at Everton, who had nevertheless opened the scoring.

Suffice to say that the fate of Everton coach Frank Lampard, although publicly backed by the club owner this week, and David Moyes, on the Hammers bench, are clearly in the balance.

Leeds 14th at Southampton , seven teams stand in two points and the good operation of the day was made by Nottingham Forest, winner of Leicester (2-0) and which climbs to 13th place with 5 lengths ahead of the red zone.