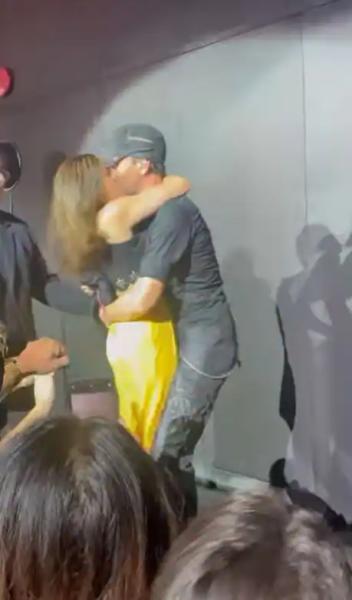 Singer Enrique Iglesias posted a video that got a lot of reactions on his Instagram account on Saturday.

The popular 47-year-old Spanish singer shared images in which we see him with a fan who wants to take a picture with him.

But she is not satisfied with a simple selfie. Indeed, when Enrique Iglesias pecks the woman's cheek, she instead offers her mouth to him and begins to kiss him directly on the lips.

The artist offers her his cheek again while hugging her, but the admirer returns to the charge and presses her mouth against that of the singer again.

The kiss lasts several seconds during which Enrique Iglesias no longer seems to be trying to push away the insistent fan. This one takes the opportunity to try to take a selfie while continuing to kiss the singer.

Finally, the singer-songwriter gets rid of the grip of the lady and leaves the place.

The video has widely divided netizens. Several have congratulated the admirer, even admitting to being jealous of her. Others condemned her actions, stressing that she had no right to attack the singer in this way.

Fans of Enrique Iglesias questioned the reaction of the artist and his decision to publish this video.

The Spanish singer has been in a relationship with ex-tennis player Anna Kournikova for twenty years. They have three children together. After giving birth to twins in December 2017, Anna Kournikova gave birth to a daughter in January 2020.