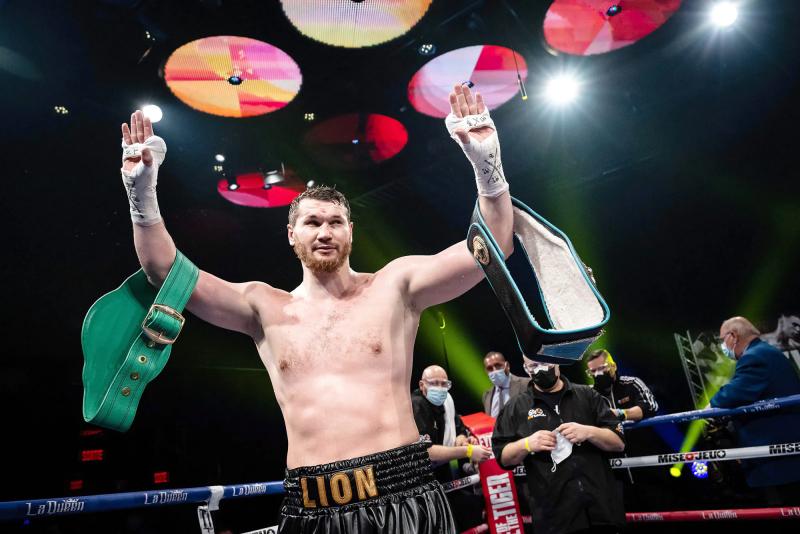 Oh! This one is a very important one for Quebec boxing. ESPN and Top Rank have reached a three-year, twelve Quebec TV gala deal with Eye of The Tiger Management (EOTTM).

The news should be confirmed today or tomorrow.< /p>

This is the first time that a Canadian promoter has signed an agreement of this magnitude with an American network. ESPN is available to 200 million Americans and ESPN+ reaches 22 million fans via streaming. America.

The agreement begins on September 9 and includes the gala on the 16th presented at the Casino de Montréal with Arslanbek Makhmudov: “It's an extraordinary agreement for Quebec boxing”, explains Camille Estephan.

“The negotiations included Top Rank's Bob Arum and ESPN's top executives. We had to protect our Canadian partners. For us, this is significant additional income.

“Eye of The Tiger retains Canadian and international rights, except for the United States, for Punching Grace, and TVA Sports protects its market in the agreement. It was not easy since ESPN belongs to Disney and is a very important shareholder in TSN and RDS,” explained Estephan.

< p>In addition, Punching Grace will produce the programs for both French and English. Just a few years ago, CBS sent 17 production trucks into the parking lot of the Coliseum in Quebec City for an Adonis Stevenson finale with PBC. We have nevertheless come a long way. Estephan should make an offer to a veteran English-language radio commentator in Montreal these days. And I figure Russ Anber might be the analyst for ESPN. But I'm biased, I love Russ.

It goes without saying that Top Rank had to find its way into the agreement since the company enjoys an exclusive contract with ESPN. It is.

Top Rank therefore becomes the co-promoter in the United States and in the world of Arslanbek Makhmudov. The Russian giant is worth a fortune. World heavyweight champions generate tens of millions in revenue. With the retirement of Tyson Fury, the market is freeing up and becoming a particularly attractive investment.

MAKHMUDOV… HALF AT TOP RANK

So on September 16, the final featuring Makhmudov against the dangerous Carlos Takam, who fought against Anthony Joshua, Joseph Parker and Alexander Povetkin, will be an exclusive Eye of The Tiger promotion. The same semi-final fight in New York would be a Top Rank promotion. In the final, it would be half and half.

Camille Estephan is currently negotiating the same kind of agreement for another of his boxers. But it slips on one essential point.

“It's a huge deal. It secures his future. Safety for him and his family. The fact that Artur Beterbiev became a big hit even though he's Russian probably helped. Bob Arum is 91 years old and very intelligent. He knows when a deal is good for him.

“ESPN will be back on December 16 in Shawinigan for Makhmudov, we hope, and Mary Spencer. It will be an exceptional opportunity to discover such a beautiful city as Shawinigan. It will also make it possible to make known our young boxers like Thomas Chabot or Alexandre Gaumont”, said Estephan.

We should know all the details of this partnership in the coming days.

Laurent Poulin of Boxingtown had heard of some sort of deal with Top Rank. Unfortunately, because of his heartbreak, Laurent mentioned that he wanted to give up the world of boxing. Yet he was gifted.

We didn't know it, but Jean-François Chabot of Radio-Canada and the two journalists from Journal attended David Lemieux's last fight in Phoenix on May 22.

As almost five years ago, we attended with Jean-Charles Lajoie and Danny Tremblay Jean Pascal's “last” fight in Miami against Ahmed Elbiali.

Since then, Jean Pascal has had time to become world champion again and face Marcus Browne, Dmitry Bivol, Badou Jack and Fanlong Meng. Three world champions and a No. 1 contender.

David Lemieux has been showered with beautiful tributes since his retirement was confirmed.

It's deserved. The David Lemieux that I got to know is a nice person.

He is often introverted, you have to take the time to sit with him and chat, and above all to listen.

We enter a generous interior made of the courage of a warrior and a sugar daddy. And we discover a man who has concepts of life that are worth hearing.

For the past few days, he has been going to the hospital every morning to visit, and to make people smile , his maternal grandmother, aged 101.

He doesn't trust everyone. Often it is a sign of intelligence and strength of character.

The analysis he made of his career at our last lunch last week was that of a mature man. Able to accept defeat and learn from it.

Because fierce courage is often moving and beautiful.