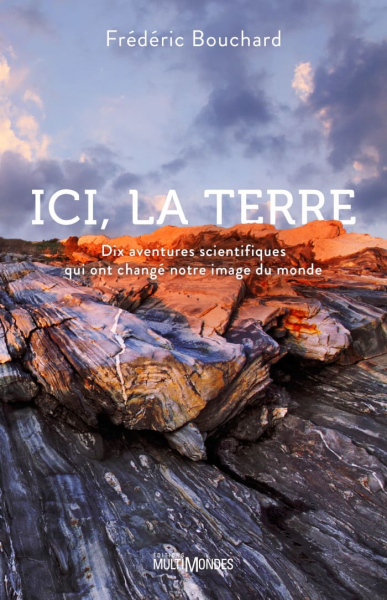 Geologist and professor Frédéric Bouchard loves stones, and he learned to decipher them, like a detective.

Through his research , he was able to detect what the earth's crust conceals deep within, secrets of all kinds that set the record straight. Like, for example, it is wrong to say that the Amazon rainforest is “the lungs of the planet”.

“Because the oxygen that we breathe on the Earth's surface comes mainly from the oceans, that is to say from the marine plankton which produces tons and tons of it by photosynthesis. ”

But it goes further in debunking some “annoying, even irritating” myths. The planet does not need a messiah, it will save itself without us, he says. Let us rather worry about the quality of the ambient air, the sustainability of our water resources, the health of our soils.

The iconoclastic geologist has retained here ten major discoveries which, over the past centuries, have changed our perception of the world in which we live. It therefore invites us on a journey through time and to high places of universal culture.

First station: Florence , in Italy, where a simple shark's tooth will challenge certain biblical principles and shed light on the stratification and formation of mountains.

Then we move to Scotland, towards the end of the 18th century. If the Bible is to be believed, the Earth is six thousand years old. Scientists will discover through the study of strata and erosions that the Earth is much older and that it has always evolved. Capital discovery that will inspire, 100 years later, Charles Darwin and his theory of evolution.

We then travel to Paris, during the French Revolution, which not only caused heads to roll, but also some old customs. It was at this time that the meter was adopted, replacing the old measures where an indescribable mess reigned, from one region to another, hence the expression “two weights, two measures”. For seven years, two astronomers will travel and measure France from north to south, between Dunkirk and Barcelona. On June 22, 1799, “the new ruler, one meter long, was presented with great fanfare to the members of the two councils of the Directory”, then deposited in the National Archives.

Did you know there is a geological map of Britain 'showing the collieries and mines, marshes and marshy plains originally inundated by the sea, and the varieties of soil according to the variations underground layers » ? It took fifteen years of hard work. An ambitious project “which will propel nascent geology to the forefront” in the 19th century.

< p>With Louis Agassiz, considered the “self-proclaimed father of the idea of ​​great glaciations in the geological past”, we learn that northern Europe, parts of Asia and North America have experienced a period of intense glaciation. Unfortunately, Agassiz was a staunch racist who would oppose Darwin's theories.

There is also the story of Russian explorer Alexander von Middendorff, the discoverer of permafrost in Siberia, “the-ice-that-never-melts”.

That of German astronomer Alfred Lothar Wegener, “one of the most outstanding scientists in Earth sciences”, whose remains lie “more than a hundred meters deep below the snow-covered and swept surface by the icy winds of Greenland, mummified by the cold for almost a century”. According to him, the lunar craters were of meteoritic and not volcanic origin, which was confirmed, half a century later, by the Apollo mission.

Also that of the American geologists Marie Tharp and Bruce Heezen, seabed specialists, who will lay the groundwork for the theory of plate tectonics. We owe them the realization of the first world map of the bottom of the oceans. Then Clair Cameron Patterson, a geochemist at the California Institute of Technology for four decades, was able to determine the absolute age of the Earth. That is four and a half billion years.

Geology is far from having said its last word!