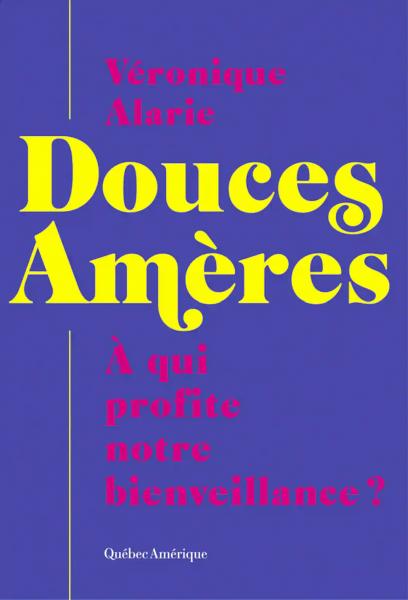 “So he's really smart!” “She, she's perfect!” These sentences, we have heard them many times around us. And very often they have the gift of making us feel miserable, spineless, less than nothing, the complete opposite of the desired effect. Especially since these nice people all want us well.

The author, Véronique Alarie, ranks in the camp of benevolent, kind, accommodating people, but with many reservations and she explains it in this book.

Here is how she defines benevolence : “Accommodate. Compromise. Distribute time, money, advice (not always solicited) to relatives, friends, those less close. Challenge certain ways of doing things? Fine, but slowly. Smiling. By suppressing my anger, without ever raising the tone. »

But where the shoe pinches is when benevolence becomes “trendy” or “branding”, says the author. Without benevolence, there is no salvation. We thus see the appearance of a “benevolence of performance”, of facade, which never takes long to crack. However, “who could claim to have always acted with perfect benevolence and who could say the same of those around him? asks Alarie. Hardly anyone, she replies.

At work as elsewhere

This benevolence has also carried over into the world of work, where it is fashionable to ask your boss to show understanding, listening and empathy towards his employees. We are far from the class struggle while nevertheless remaining in an unequal balance of power.

In some companies, we have even created a new job: “responsible for happiness at work”, we learn. If this initiative may seem, at first glance, the most sympathetic, we quickly realize that behind this “benevolent management”, there is the search for greater performance, better profitability, an increase in profits, which has nothing to do with employee welfare. Thus, to unearth the ideal candidate for any position in a company, we would no longer bet so much on his skills as on his “bonhomie”, explains the journalist, who briefly retraces, not without a certain indignation, her career as a self-employed worker in listing all the times we've been unethical with her.

“I have already been ordered to refuse a job elsewhere, assuring me of the imminent creation of the position that I have been promised for years – before going back on my word after the fact. When my daughter was barely six days old, a company contacted me and asked me to undergo interviews and written exams in order to get a job scheduled to start a year later. At the end of these tests, which could not wait, the company in question offered me the position… then decreed a hiring freeze just before the signing of my contract. »

So how do you ask an employee to perform if they constantly feel like they are sitting on an ejection seat? Business as us, she concludes. Previously, we had jobs for life, with a pension at the end of the term, she says. Today, we talk about “fulfilment” by browsing right and left, and “with a beautiful big smile”, please.

But benevolence, to work well, must be reciprocal. Above all, we must not forget all the “mental load”, the “daily logistics”, the “invisible work” that is specifically asked of women, “everything that allows the world to function”. Even today, she says, the burden of happiness and family balance rests on the shoulders of women.

Alarie also discusses benevolent parenting and its excesses, as well as the masculinist discourse that claims confine women to the traditional and archaic role of housewife and mother, with a ban on raising their voices.

In conclusion, the journalist says she dreams of equitable and enlightened benevolence. “It is the bedrock of our civilisation…particularly in reaching out to the most vulnerable and oppressed members of our communities. By helping them speak up. »

Even if her petticoat sticks out, as she admits – she classifies Manon Massé among her “models of gentleness” –, Alarie fights here a beautiful fight against malevolence and for sharing.