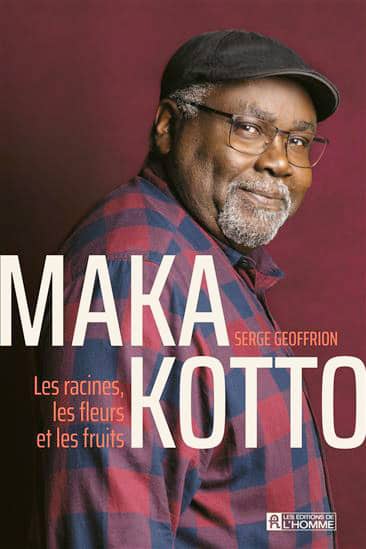 I had discovered it in Jacques W. Benoît's film, How to make love with a Negro without getting tired , adapted from Dany Laferrière's novel that I had published a few years earlier. He played the role of Bouba, Vieux's accomplice, who spends his days reading Freud, listening to jazz and sleeping.

Then I saw him again in a show at a Just for Laughs festival. I said to myself: I like this guy, he has things to say. As I had a Humor collection in my small publishing house, I had approached him to explore the possibility of publishing his stories. We had made an appointment and the meeting was pleasant, but rather than leaving with his humorous stories, I came out with a manuscript of poetry, Woman, which I published in 2002.

Serge Geoffrion was also impressed by the track record of the most Quebecois of Cameroonians, who will succeed in being elected Member of the National Assembly of Quebec, and it is for this reason that he invites us to discover this exceptional model. integration into their host society.

Maka Kotto's father owned a bar in Douala, where the greatest musicians of the day performed. It was in this atmosphere that he bathed from an early age, surrounded by four women: his two sisters, his grandmother and his great-grandmother, his mother having separated from his father when he was very young.

“This constant gaze I had on the insight and lucidity of African women, Maka will say, was, in a way, a master class that forged my personality and helped me in my artistic journey. It was, without knowing it, an excellent school of life. »

Walking in the shade

In college, he was passionate about the arts, but this passion did not prevent him from nurturing another passion, that of social justice. The great classics of independence, such as Franz Fanon, are part of his reading. At night, he distributes leaflets to denounce the dictatorship that rages in his country.

Abandoning his studies in political science, he entered the Free Conservatory of French Cinema in Paris at the age of 23, while taking theater and directing classes in the evening. The actor Michel Blanc then offered him a role in his first film, Marche à l’ombre. Huge success. His career is launched, but he will always refuse “to interpret roles which could project a negative portrait of black people”.

His role in the film How to make love with a Negro without getting tired will be decisive for the rest of things. He discovered a welcoming and open Quebec. “You don’t fall in love with a country; it's the people who make us love the country,” he says.

After 20 years of an international artistic career where he interpreted some fifty characters in film, television and theatre, Maka Kotto accepted the invitation of Prime Minister Bernard Landry to make the leap into politics. Defeated in the Quebec elections, he emerged victorious for two terms in the federal elections as the Bloc Québécois candidate in the riding of Saint-Lambert. In March 2008, he resigned from his post as a Bloc Québécois deputy to stand in the by-elections in the riding of Bourget under the banner of the Parti Québécois.

Maka Kotto was in all the fights for the affirmation of the French language and the defense of Bill 101 and for the integration of newcomers. Today, he continues to animate Quebec political life through his writings and reflections. This book bears witness to this masterfully.

THE DIVAGATES OF A SOLITARY SCRIPTOR – ABOUT HUMOR< /strong>

Pierre-Michel Tremblay is a discreet man, with an impressive track record since he has worked behind the scenes of show business as the editor of several programs and humorous sketches for many years. Like Jean-Jacques Rousseau in his “dreams”, PMT likes to walk alone to question the meaning of life. His life is the world of humor, “a toxic environment [populated] by fresh comedians who are more narcissistic and arrogant than funny”, he says without embarrassment. But don't throw the baby out with the bathwater, he said. We must distinguish between the humor industry and humor, which is “a form of wit consisting in describing the imperfections of reality in a funny way”. Can we imagine a world without humor, he wonders. It would look like a horrible nightmare, he replies. So, let's not deprive ourselves of laughing and laughing when the opportunity arises. It's good for morale.

A collection of chronicles, more or less funny, some of which have been heard on the show Plus on est de fous, plus on lit, on ICI Première, or on the show Since it is necessary to get up, on the waves of 98.5 FM. The kind of forced, formatted, made-to-order humor that is supposed to make people laugh and underline our failings. “Do you know what? /I can hold a gay pride flag in my hands/It's not dangerous /I'm not gay/and I can hold one easily/And if I lend it to you sir /it won't matter /no matter how much you rub your face with it/you won't automatically start liking/disco and Céline Dion/and it's not going to give you pustules in the shape of/lesbians doing scissoring/it's harmless” . But other stories are worth the detour, such as that of “Célestin’s behind”: I had a good laugh.