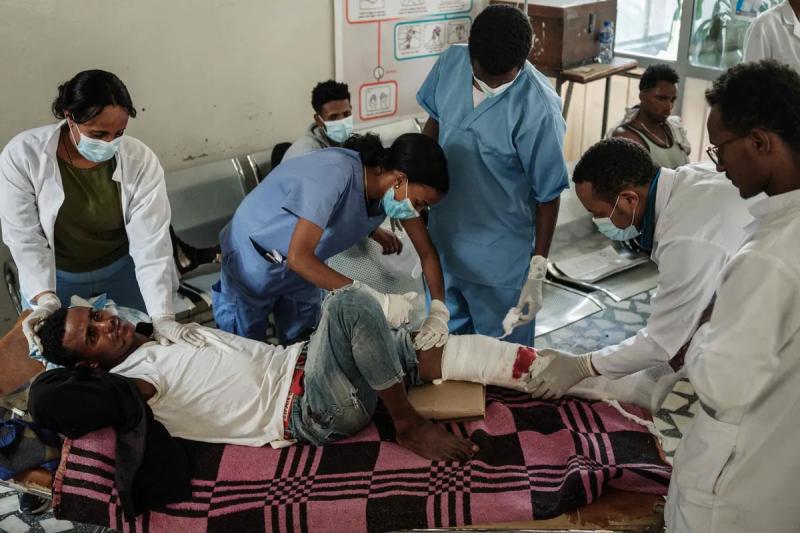 Ten people were killed by two aerial bombardments on the Tigray region's capital, Mekele, according to a hospital official, soon after rebel authorities in the region opened the door to a ceasefire and negotiations peace with the Ethiopian government.

The attack hit a residential area of ​​Mekele and “killed and injured innocent civilians”, tweeted earlier Getachew Reda, a spokesman for the rebel authorities from the Tigray People's Liberation Front (TPLF), which has been fighting the Ethiopian government for nearly two years, without providing further details.

Fasika Amdeslasie, a surgeon at Ayder Referral Hospital, wrote on Twitter that at least two women were injured during the first bombardment. “One was at his home and another was about to leave” when they were hit, he said on Twitter.

The AFP was unable to verify these reports with other sources, as access to Tigray, at war since November 2020, is very restricted and communications in the region very difficult.

It According to the Tigrayan rebel authorities, this is the second round of Ethiopian airstrikes on Mekele in two days. On Tuesday, they accused Ethiopia of bombing Mekele University with a drone, injuring people and damaging buildings.

The Ethiopian government of Prime Minister Abiy Ahmed has not responded to these accusations.

The two camps reject responsibility for the resumption of hostilities which has dimmed the slim hopes of a negotiated peace.

On Sunday, the Tigrayan authorities said they were ready “for a robust peace process under the auspices of the African Union” (AU), removing an obstacle to negotiations with the Ethiopian government.

They had so far always rejected the mediation of the AU special envoy, former Nigerian President Olusegun Obasanjo, denouncing his “closeness” with Abiy Ahmed.

They also indicated that they were ready for an “immediate and mutually accepted cessation of hostilities” and had a team of negotiators “ready to be deployed without delay”.

The Ethiopian government, which has always advocated mediation led by the AU, did not react to this announcement.

The international community, for its part, unanimously urged the belligerents to seize this “opportunity” for peace.

The toll of this deadly conflict is unknown. It was marked by abuses against civilians by both sides, displaced more than two million people and plunged hundreds of thousands of Ethiopians into near-famine conditions, according to the UN. /p>

In March, the UN claimed that at least 304 civilians had been killed in the previous three months in airstrikes “apparently carried out by the Ethiopian Air Force”.

The government, for its part, claims to only target military targets and accuses the TPLF of staging civilian deaths.

This conflict in northern Ethiopia broke out in November 2020, when Abiy Ahmed, Nobel Peace Prize winner in 2019, sent the federal army to Tigray to dislodge dissident authorities from the region, accusing them of attacking military bases.

Initially defeats, the rebel forces regained control of most of the region during 2021, during a counter-offensive that spilled over into A mhara and in Afar. They then retreated towards Tigray.